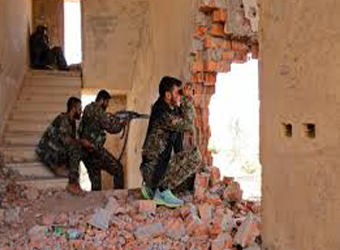 Western-backed Syrian rebels said on Wednesday that Russian jets attacked them as they tried to advance against Iran-backed militias in a region of Syria’s southeastern desert.

They said six jets bombed their positions as they moved towards Zaza checkpoint near Sabaa Biyar, a small town near the Damascus-Baghdad highway and the borders with Iraq and Jordan.

They identified them as Russian because they flew in formation and at higher altitude than Syrian jets.

“A sortie of Russian jets bombed us to repel our advance after we broke the first lines of defence of the Iranian militia and took over advanced positions near the Zaza checkpoint,” Saad al Haj, a spokesman for Jaish Osoud al-Sharqiya, one of the main groups in the area told Reuters.

The southeast of the Syrian desert, known as the Badia, has become an important front in Syria’s civil war between President Bashar al-Assad, backed by Iran and Shi’ite militias, and rebels seeking to oust him.

They are competing to capture land held by Islamic State, which is retreating as it comes under intense attack in Iraq and along Syria’s Euphrates basin.

Haj said none of their fighters were killed. Another FSA official, Said Seif from the Ahmed Abdo Martyrs group, also said Russian planes hit the rebels when they began storming militia defences.

Jets from a U.S.-led coalition against Islamic State hit pro-government Iran-backed militias on May 18 as they tried to advance south of Zaza towards Tanf, a base on the Syria-Jordan border where U.S. troops are training FSA rebels.

U.S. officials said the forces, which it described as being directed by Iran, posed a threat to U.S. troops and Syrian fighters it backs in the area.

The militias, believed to be Shi’ites from Iraq, retreated to the area around Zaza checkpoint and the coalition has since warned them to stay about 50 km from the base.

U.S.-backed rebels took Tanf from Islamic State last year and intelligence sources say they mean to use it as a launchpad to capture Bukamal, a town on Syria’s border with Iraq and an important jihadist supply route.

The coalition’s presence in Tanf, on the Damascus-Baghdad highway, was also meant to stop Iran-backed groups from opening an overland route between Iraq and Syria, intelligence sources say.

Damascus has declared the Badia and Deir al-Zor priorities in its campaign to re-establish control over Syria, which has been shattered by six years of war that have killed hundreds of thousands of people.

Trump to unveil decision on global climate deal on Thursday