Syrian rebels weakened in Aleppo battle by their own divisions 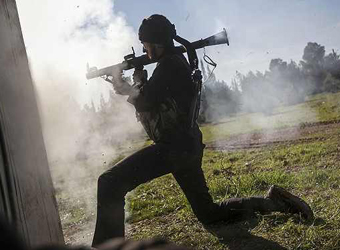 As the Syrian government and its allies prepared to ramp up their attack on Aleppo in November, one of the rebel groups defending the opposition-held part of the city took up arms against another, seizing its stores of ammunition, fuel and food.

The incident near an Aleppo frontline underlined the rebel rivalries that only worsened in the face of an unprecedented onslaught by Russian-backed government forces, supported by Shi’ite militias from across the region.

Rebel infighting has plagued the Syrian opposition since the start of the uprising against President Bashar al-Assad in 2011, helping to put him on the verge of the biggest victory yet.

The unexpectedly rapid retreat in Aleppo is provoking recriminations among an opposition divided by local rivalries as well as ideological differences between jihadists and more nationalist groups.

With Aleppo long seen as a stronghold of mainstream groups fighting under the Free Syrian Army (FSA) banner, jihadist influence will only grow if Assad and his allies win there, leaving the West with even fewer partners on the ground.

In the November incident, an FSA group, Fastaqim, came under attack from the Nour al-Din al-Zinki movement, a faction that also counts itself part of the FSA but has recently moved closer to jihadist groups.

This damaged morale. “Unfortunately it had a very negative impact on the factions and on the internal situation,” said an official in another Aleppo rebel group, the Jabha Shamiya, speaking from Turkey.

“It affected the psychological condition of the fighters, and the internal situation for the civilians.”

The struggle amounted to a turf war, as so often among the myriad rebel groups.

Zinki sources said the background to the incident was a Fastaqim plot against one of its allies. Fastaqim said Zinki was trying to crush mainstream groups in Aleppo in collaboration with the jihadists of the Fateh al-Sham group.

“In some ways, the relations among the Aleppo factions deteriorated even as the pro-regime offensive was ramping up,” said Noah Bonsey, senior analyst with International Crisis Group. “That may have played a role in the opposition’s limited ability to defend against the opening stages of the offensives.”

The rebels have been on the back foot since the Russian air force intervened on Assad’s behalf in September, 2015. Rebels say their internal divisions are a marginal factor in their setbacks when compared with the firepower unleashed by the Russian bombers, Shi’ite militias, and the army.

But splits have nevertheless played a part. Conflict among rebels this year helped Assad and his allies to make significant gains near his seat of power in Damascus.

The newly-appointed leader of one of the biggest rebel groups, the Islamist Ahrar al-Sham, blamed “destructive divisions” this week for the opposition’s setbacks, and urged a new effort toward unity.

But Ahrar al-Sham also faces divisions in its own ranks between one camp that is close to the FSA groups, and another that wants closer ties with al Qaeda-inspired insurgents.

The rebels are making what may be a final attempt to organize themselves into a more effective “Aleppo Army”. But after losing large parts of their territory in the city, it may be too late.

The loss of Aleppo would still leave the rebels in control of large areas to the west and southwest of the city, including all of Idlib province and large parts of Hama province.

But these are areas where jihadist factions dominate, including Fateh al-Sham, formerly known as the al Qaeda-linked Nusra Front, which has crushed numerous Western-backed rebel factions during the conflict.

Jihadist influence discouraged the United States from supplying rebels with the more powerful weaponry they sought. U.S. President-elect Donald Trump has indicated he may stop supporting the opposition altogether.

A rebel commander in a town north of Aleppo said that instead of protesting against Assad, people in his area had put up posters criticizing rebel commanders.

“They are all demanding unity,” he said.