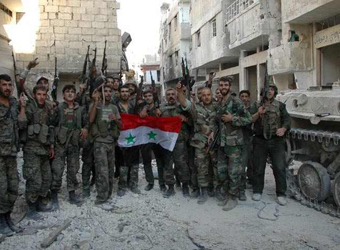 Syrian state media on Friday cited field commanders as saying Turkey helped anti-government rebels launch a counter attack against the Syrian army and its allies in the northwest this week, underlining recent regional tensions over the fighting.

“Field commanders confirmed to the SANA correspondent that terrorists from the Turkistan Islamic Party with the direct support, direction and planning of the Turkish regime, brought most of their forces… to start their attack,” said SANA, the state news agency.

It added that the rebels had used Turkish vehicles. There was no immediate Turkish reaction to the allegations.

Turkey has been a major backer of Syrian rebels but has recently been working with Damascus’s allies Iran and Russia in meetings with the stated aim of reducing violence.

Rebel groups launched a counter attack in Idlib on Wednesday after a rapid push by the army and its allies towards the Abu al-Duhur airbase.

A military media unit run by the government’s Lebanese ally Hezbollah, and a Britain-based war monitor, the Syrian Observatory for Human Rights, said on Friday the army had recaptured several villages taken in the rebel counter attack.

Turkey has criticized the army’s assault in Idlib, located in northwest Syria in the rebels’ biggest remaining stronghold, saying on Friday it would cause a new wave of migration. Idlib borders Turkey.

Tunisia arrests another 150 including opposition leaders over unrest