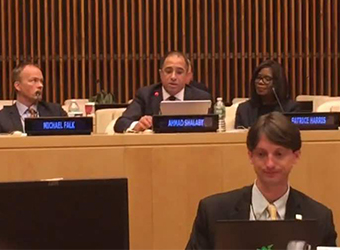 Shalaby was one of 20 people invited to talk about the importance of SMEs representing his role as an ICSB Board Member and MD at Tatweer Misr.  Tatweer Misr exerts active efforts towards bringing in international universities, whose main ethos is focused on entrepreneurship and MSME development.

“Our aim is to create partnerships with those institutions that will allow us to establish a unique university that focuses its learning on graduating the next generation of entrepreneurs” Shalaby said.

As part of its services, the new university will be the first, in Egypt, to provide first-class education focusing on innovation, entrepreneurship education, and SME development in six main schools.

“As a company, we see this step as an important tool in creating a nation of entrepreneurs that represent the backbone of small and medium sized businesses and the future hope of Egypt.” he added.

Today MSMEs have the potential to make a long-lasting positive impact on global development needs, as the engine for economic growth and job creation, accounting for two out of three new jobs created worldwide. Micro-, small- and medium-sized enterprises account for up to 45 percent of total employment, and up to 33 percent of national income in emerging economies, this number represents only the formal sector.

Including the informal sector, this may rise to over 70 percent in some emerging countries.   More importantly the World Bank estimates about 600 million jobs will be needed in the next 15 years, especially in Asia and Africa, much of which will be generated through MSME’s.

Only a year ago, ICSB submitted a petition for the designation of that day signed by various members around the world including from Egypt Minister Nasr, Ayman El Tarabishy, and  Ahmed Shalaby. Following that, the Mission of Argentina to the UN authored the resolution that was presented to and negotiated with all UN member states. The resolution was co-sponsored by 45 member states, representing over 5 billion people.