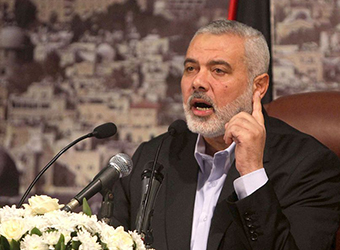 Hamas officials confirmed the visit. All spoke on condition of anonymity as they were not authorized to brief reporters.

Haniyeh visited Egypt on his way back from Qatar, where he spent the last few weeks. Palestinian reports said he will discuss the relations between Egypt and Hamas with Egyptian intelligence officials, specifically focusing on the security situation in Sinai and the Gaza blockade.

Haniyeh is the deputy of Khaled Meshal, the leader of Hamas political bureau. Haniyeh is expected to take Meshal’s place after the latter steps down.

Hamas, an Islamic militant group with historic links to Egypt’s Muslim Brotherhood, enjoyed warm relations with Egyptian President Mohamed Morsi, a top Brotherhood figure who was overthrown by the military after a divisive year in power.

The Egyptian government tightened an Israeli-Egyptian blockade on Hamas-ruled Gaza shortly thereafter, but in recent months there have been signs of a thaw in relations.

Source: The Associated Press and Haaretz