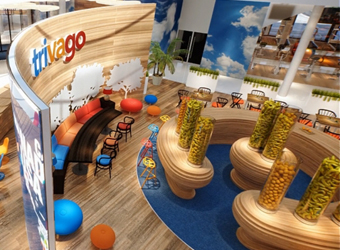 Hotel booking website Trivago opened at $11.20 per share in its debut Friday on the Nasdaq stock exchange.

Trading under the symbol “TRVG,” the stock closed at $11.65 a share on Friday, up more than 7.73 percent from its IPO pricing of $11 a share. Reuters had earlier reported that the company’s indicated IPO price range was $13 per share to $15 per share.

The offering will value Trivago as a stand-alone company, controlled by Expedia, which owned 63.5 percent of the company as of Sept. 30, according to the prospectus. Expedia CEO Dara Khosrowshahi told investors in July that it did not plan to sell its own shares.

The company has mounted a transition to mobile over the last three years, as more than half its revenue is now from mobile, Schroemgens said.

Germany-based Trivago posted revenue of $425.6 million in the nine months ended Sept. 30, the company’s prospectus said. It has an international presence via 55 localized websites and apps in 33 languages.

The company’s offering comes as start-ups like Airbnb provide challenges to traditional hoteliers, and amid a tepid U.S. IPO market. There have been 120 offerings filed in the U.S. so far this year, a 47.1 percent decline from last year, according to Renaissance Capital.