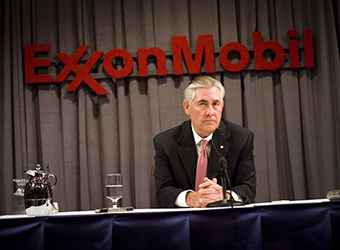 Exxon Mobil Chairman and CEO Rex Tillerson has been chosen by U.S. President-elect Donald Trump for the post of Secretary of State, NBC News reported on Monday, capping weeks of speculation that included a close political ally and a sharp critic.

Trump took again to Twitter to state he would announce the choice on Tuesday.

But two sources familiar with the process told NBC News that Trump has already picked Tillerson. The 64-year old Tillerson has negotiated business deals in Russia that led to a working relationship with Russian President Vladimir Putin. He has spent his entire career at the company now known as Exxon Mobil.

Late Monday, former Republican presidential candidate Mitt Romney appeared to bow out of the running in posts on social media, ending speculation that Trump would welcome a previously sharp critic into his administration. During the campaign Romney said Trump was a poor choice for the presidency.

Last week, close Trump ally and former New York City Mayor Rudy Giuliani said he had taken his name out of consideration. President Barack Obama picked his nomination rival Hillary Clinton as Secretary of State, and she left after his first term to prepare for her 2016 run for the White House.

The U.S. Senate must confirm the cabinet-level position, with rumblings that some members of Trump’s Republican party are uneasy about the business leader as the nation’s top diplomat. Upon taking office, Trump would formally nominate Tillerson for confirmation by the Senate. If confirmed, Tillerson would be fourth in line to the presidency.

Trump’s latest tweet follows news that he is delaying his announcement until January about how he plans to leave his business, NBC confirmed Monday.