Trump tells Egypt’s Sisi he wants to work on relationship 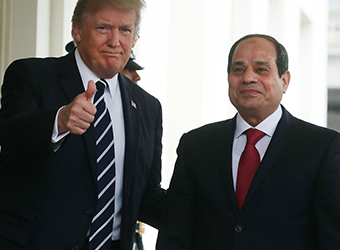 U.S. President Trump said Thursday on a phone call with his Egyptian counterpart that he wants to improve America’s relationship with the country, just days after the U.S. announced it would withhold millions in humanitarian aid to Egypt.

Egyptian President Abdel Fattah al-Sisi’s office released a statement saying that Trump “expressed his keenness” to overcome barriers between a closer working relationship with the country, according to Reuters.

“President Abdel Fattah al-Sisi received a phone call tonight from U.S. President Donald Trump who affirmed the strength of the friendship between Egypt and the United States and expressed his keenness on continuing to develop the relationship and overcome any obstacles that might affect it,” the statement read.

Reuters reported earlier this week that the U.S. would withhold millions from the country over its failure to promote democratic institutions, many of which were stripped away when Egypt’s military forced President Mohamed Morsi from power in 2013.

Hundreds of people died in the 2013 military takeover of Egypt’s government, which the United States has refused to officially label a coup.

Trump previously bragged in May that it took him “10 minutes” on the phone with Egypt’s president to secure the release of Egyptian-American aid worker Aya Hijazi from captivity.

“I was with President el-Sisi for 10 minutes. During that 10-minute session, I said it would be a great honor for this country and I think it would be a very positive step if Aya were released,” Trump said at the time.

“As you know, President Obama tried to have Aya released for three and a half years,” he added.