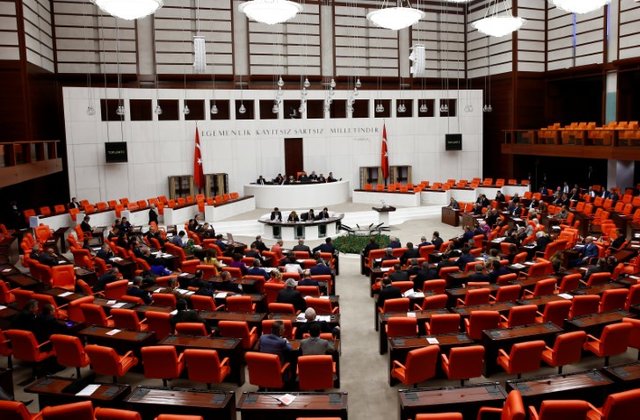 The regulations, which apply for three years, grant broader authority to local governors – including the ability to ban public gatherings – extend detention periods and allow public servants’ dismissals if there are links to or contacts with terrorist organizations or other perceived threats to national security.

Parliamentarians completed approval of the individual articles of the law late on Tuesday. Supporters of new law say the new regulations are necessary to carry out a more effective fight against terrorism in the absence of state of emergency laws, which lapsed last week.

Opposition members say it effectively extends the state of emergency for another three years.

“When we should be dressing the deep wound that the state of emergency process has opened in our democracy and justice system, we are experiencing the beginning of a more damaging process,” six lawmakers from the main opposition Republican People’s Party (CHP) said in a dissenting opinion on the bill.

“This new system … is both in an abstract and concrete manner a ‘CIVILIAN COUP LAW’.”

A brawl erupted during the debates on the new law earlier in the week, when Ahmet Sik, a lawmaker from the pro-Kurdish opposition Peoples’ Democratic Party (HDP), criticized the bill.

“You are nurturing your arrogance, created by being in power, with lies and ignorance. You are fuelling your aggression against those who speak the truth,” he said.

Following the brawl, Sik was ordered to leave the assembly and was banned for two sessions.

The state of emergency, declared after the failed 2016 putsch, expired on July 18 but President Tayyip Erdogan’s opponents say the new executive presidency and the latest security measures give him sweeping powers to stifle dissent.

Under the presidential system, Erdogan can issue decrees on executive matters and appoint and remove senior civil servants, including some judges and prosecutors.

Some 160,000 people have been detained under emergency rule and nearly the same number of state employees have been dismissed, the U.N. human rights office said in March. Of those detained, about 77,000 have been formally charged and kept in jail during trial, the interior minister said in April.

Critics of Erdogan accuse him of using the failed putsch as a pretext to quash dissent. Turkey says the measures are necessary to combat threats to national security.