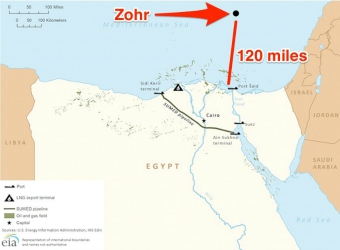 Al Katheeri made his remarks during his meeting with Egyptian Oil Minister Tarek el-Molla in Cairo.

Eni currently holds through its subsidiary IEOC a 60 percent stake in the block, the biggest ever gas discovery in the Mediterranean, with 400 million standard cubic feet per day. Rosneft holds a 30 percent share and BP 10 percent.

The deal, estimated at $934 million, fits with Eni’s so-called ‘dual exploration’ strategy, under which the state-controlled group aims to sell down stakes in fields it operates in order to raise cash to fund future development and support dividends.

Production at Zohr began late last year, which was discovered in August 2015 by Eni and is already reshaping the geopolitics of energy in the eastern Mediterranean, holding promise for the region but also stoking tension among neighbouring countries. It should add 70,000 boe/d (barrels of oil equivalent per day).

Mubadala Petroleum is entirely owned by Mubadala Investment Company, the Abu Dhabi-based state fund with assets worth over $125 billion. Its chief executive said the deal was “important and attractive”.

IDA seeks to launch 12 industrial complexes in the upcoming period