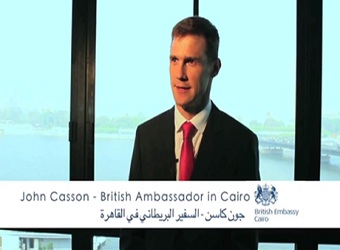 A new medical joint venture between an Egyptian and a British companies to launch a state-of the-art-facility to produce catheters is set to start at an investment of $4 million, the British embassy in Cairo announced on Thursday.

The new facility, which involves the British company Kimal and the Egyptian Arab Medical Equipment Company (AMECO), is planned to be set up at an industrial complex in 6 October City.

The project should provide the Egyptian healthcare industry with innovative products and enhanced treatment equipment, as well as opportunities for export to 25 new countries, according to the embassy statement.

Egypt’s AMECO will be expected to introduce know-how from the UK to the Egyptian medical technology sector.

British ambassador to Cairo John Casson said in the statement that the new venture demonstrates the potential for British companies to help develop Egypt’s economy.

“In the next five years, the $4 million in investment we are celebrating today will reach $20 million and provide Egypt with top-quality medical products, with new jobs for Egyptians and new exports to European countries,” Casson said.

AMECO is a privately owned company that was founded as a family business in 1984. The UK is Egypt’s top foreign investor, with $43 billion in investment in the fiscal 2016/17 and over 1,450 British businesses active in the country.