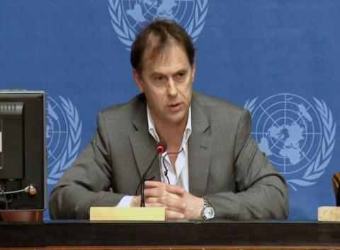 The United Nations’ human rights office said on Tuesday that an Egyptian court’s decision to sentence 529 members of the Muslim Brotherhood to death contravened international law and voiced concern for thousands of others facing the same charges.

The Brotherhood’s leader Mohamed Badie and 682 others went on trial on Tuesday in the same court district in the Upper Egypt governorate of Minya.

“The mass imposition of the death penalty after a trial rife with procedural irregularities is in breach of international human rights law,” U.N. human rights spokesman Rupert Colville said at a news briefing in Geneva.

“A mass trial of 529 people conducted over just two days cannot possibly have met even the most basic requirements for a fair trial,” Colville said.

Some 398 of the defendants were tried in absentia, he said.

The exact charges against each defendant were unclear as they were not read out in court and not all defendants had a lawyer, Colville said.

Defence lawyers said that they did not have proper access to their clients and that the court did not consider evidence they had presented on their behalf, he said.

“It is particularly worrying that there are thousands of other defendants who have been detained since last July on similar charges. The Minya criminal court in southern Egypt is today trying more than 600 individuals for membership to the Muslim Brotherhood, among other charges,” Colville said.

Qatar Calls for Dialogue in Egypt