US-led coalition says fewer than 3,000 IS fighters still in Iraq and Syria 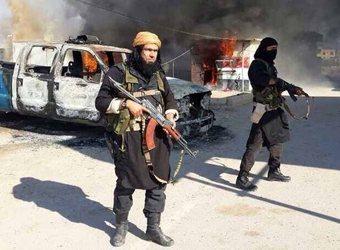 The United States-led international coalition fighting Islamic State determines that fewer than 3,000 fighters belonging to the hardline Sunni militant group remain in Iraq and Syria according to its spokesman.

Islamic State’s self-proclaimed caliphate has crumbled this year in Syria and Iraq, with the group losing the cities of Mosul, Raqqa and swathes of other territory.

“Current estimates are that there are less than 3,000 #Daesh fighters left – they still remain a threat, but we will continue to support our partner forces to defeat them,” U.S. Army Colonel Ryan Dillon tweeted, using an Arabic acronym for Islamic State.

Dillon’s tweet was part of his responses to an online question and answer session in which he also said the coalition had trained 125,000 members of Iraqi security forces, 22,000 of which were Kurdish Peshmerga fighters.

When asked if the United States planned to build permanent military bases in Iraq or Syria the defeat of Islamic State, Dillon said it would not. “No – the Government of #Iraq knows where and how many from Coalition are here to support operation to defeat #Daesh; all bases are #Iraqi led,” he tweeted.

The coalition will begin a transition from focusing on retaking territory to consolidating gains, it later said in a statement following a meeting of its leaders with Iraqi military commanders.

“We will continue to support our Iraqi partners in the battle against ISIS (Islamic State) with training, equipment, advice and assistance,” said Major General Felix Gedney, the coalition’s Deputy Commander for Strategy and Support.

“The next phase will focus on the provision of lasting security, while developing Iraqi sustainability and self-sufficiency,” he said.

The coalition was responsible for “liberating more than 4.5 million Iraqis and over 52,200 square kilometres of territory,” the statement said. It has come under fire, however, for the number of civilian casualties resulting from the air strikes it carries out in support of local forces.

The coalition says its strikes have unintentionally killed at least 801 civilians between August 2014 and October 2017, a far lower figure than figures provided by monitoring group.