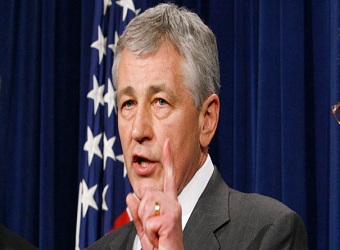 US Defense Secretary Chuck Hagel urged Egypt’s interim authorities to “advance the political roadmap” in a phone call with the country’s army chief on Tuesday, a Pentagon spokesman said.

Hagel “urged Minister Al-Sisi to continue to take steps to demonstrate the interim government’s commitment to advance the political roadmap,” he said.

Relations between Washington and Cairo have come under strain since Sisi led a July 3 coup against President Mohamed Morsi, the country’s first elected leader, followed by a violent crackdown against his supporters in the Muslim Brotherhood.

Hagel’s phone conversation came after the United States last week renewed calls for Egypt to lift a state of emergency in force since August, and amid more arrests of Morsi supporters.

Since Morsi’s ouster, more than 2,000 members of the Brotherhood have been arrested and several are facing trial.

Churches, shops and schools belonging to Coptic Christians meanwhile have come under attack in recent weeks by Morsi loyalists, who accuse the Christian community of backing the military that toppled the head of state.

And in the Sinai, the Egyptian military has poured in troops and armor to counter an insurgency that surged after Morsi’s overthrow.

Throughout the crisis and despite tensions with Cairo, the US defense secretary has maintained regular contact with Sisi, partly as a result of America’s deep ties to Egypt’s military dating back decades.

Washington has cancelled military exercises with Cairo and delayed the delivery of fighter jets since Morsi’s ouster.

However, the US government has yet to cut off military and economic aid, worth $1.55 billion a year, though officials say the issue is still under review.