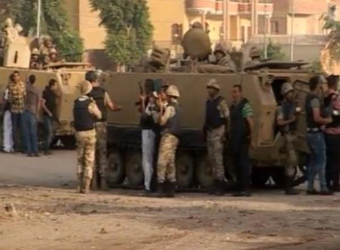 An Egyptian police officer was shot dead on Thursday, state media reported, in clashes on the outskirts of Cairo as security forces tried to reassert control over an area where 11 policemen were killed in a militant attack last month.

Police and soldiers entered the town of Kerdasa at daybreak in the second operation this week to try to restore control over Islamist-dominated areas where hostility to the authorities has grown since the army deposed President Mohamed Morsi on July 3.

Security sources said the forces had seized dozens of weapons, including rocket propelled grenades. The police officer, a general, was killed in an exchange of gunfire on the outskirts of the town. Fifteen people had been arrested.

“The security forces will not retreat until (Kerdasa) is cleansed of all terrorist and criminal nests,” said the spokesman, Hany Abdel Latif.

There had been little or no sign of state authority in Kerdasah since an August 14 attack on its police station, which was hit with rocket propelled grenades and torched as police broke up protests by Morsi supporters in Cairo.

Hundreds of Morsi supporters were killed on August 14, when the security forces moved against the pro-Morsi protest camps in Cairo, setting off the worst spasm of violence in Egypt’s modern history.

In a similar operation earlier this week, the security forces moved into the town of Delga in the southern province of Minya – scene of some of the worst violence last month. Around 70 people were killed and about 20 churches torched in Minya.

At least 2,000 people, mostly Morsi supporters, have been arrested since Morsi’s ouster, and more than a hundred members of the security forces have been killed.

Kerdasah, known for producing fabrics, is 14 km (9 miles) from Cairo.