US Urges Egypt to Implement Rights under New Constitution 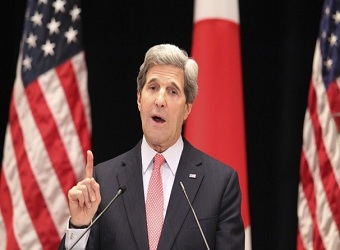 The United States Saturday called on Egypt to fully implement the rights guaranteed under its newly approved constitution.

Egyptian voters approved the constitution by more than 98 percent in a referendum result that the government hailed as a popular endorsement of the army’s overthrow of Islamist President Mohamed Morsi.

US Secretary of State John Kerry cautioned in a statement, however, that “it’s not one vote that determines a democracy.”

He added “it’s what comes next that will shape Egypt’s political, economic and social framework for generations.

“As Egypt?s transition proceeds, the United States urges the interim Egyptian government to fully implement those rights and freedoms that are guaranteed in the new constitution for the benefit of the Egyptian people, and to take steps towards reconciliation,” he stressed.

“The brave Egyptians who stood vigil in Tahrir Square did not risk their lives in a revolution to see its historic potential squandered in the transition,” Kerry said, adding that Egyptian leaders must “make difficult compromises and seek a broad consensus on many divisive issues.”

Kerry said the United States had longstanding concerns about respect for political rights in Egypt.

“We have consistently expressed our serious concern about the limits on freedom of peaceful assembly and expression in Egypt, including leading up to the referendum, just as we expressed our concerns about the dangerous path Egypt’s elected government had chosen in the year that lead to 2013’s turbulence,” he said.

So “the United States again urges all sides to condemn and prevent violence and to move towards an inclusive political process based on the rule of law and respect for the fundamental freedoms of all Egyptians,” Kerry added.

The new charter replaces an Islamist-inspired one adopted in a December 2012 referendum under Morsi with about two-thirds of the vote and a 33 percent turnout.

The military removed Morsi days after millions of protesters began rallying against him on June 30, setting off months of unrest by his followers who decried what they called a “coup.”

Army chief Abdel Fattah al-Sisi is expected to make up his mind on a presidential bid now that the results have been announced, with his backers already calling for a rally on January 25 to emphasize their support.

Presidential and parliamentary elections have been promised for later this year.