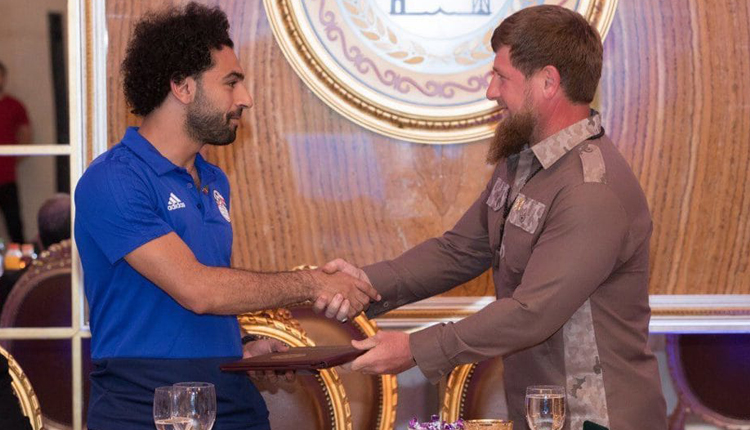 Leader of Chechen Republic Ramzan Kadyrov bestowed on Egyptian sensation Mohamed Salah honorary citizenship, the highest form of acknowledgement the republic gives, during an honorary ceremony which Chechen hosted on Friday for the Egyptian National Team.

“Tonight I signed a decree to grant the high honour to the great footballer who plays for Egypt and Liverpool,” describing the citizenship for Salah as a “well-deserved honor.”

President of the Egyptian Football Federation Hany Abut Reeda thanked the Kadyrov and the Chechen people for their hospitality and care for the national team since the moment they arrived.

The ceremony included a dinner at the presidential palace to celebrate the ending the Egyptian team’s time in Chechen, where they were based for their training camp during their participation in the World Cup event.

The Chechen president has given the same title previously to French actor Gerard Depardieu.

The Egyptian team took part in the World Cup in Russia for the first time since 1990. Egypt was placed in Group A alongside host Russia, Uruguay and Saudi Arabia. Egypt lost 1-0 to Uruguay, giving an honorable performance before they were thrashed 3-1 by Russia. The Egyptian team has one more match to play against Saudi Arabia, which till take place on Monday, as a probably elimination looms due to two losses.

Salah is not just the star of the Egyptian National Team, he has a great overall season, winning the Golden Boot along with several other awards for his performance with Champions League runner-ups Liverpool. However, his World Cup performance was lacklustre due to an injury he sustained during the Champions League final after a tussle with Real Madrid’s Sergio Ramos.

Egypt’s Alexandria to have private beaches for tourists only