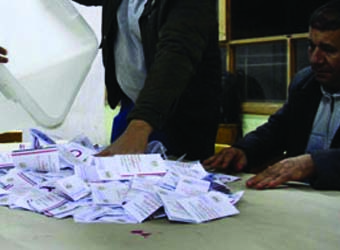 Secretary of State John Kerry on Saturday raised concerns about the fairness of a referendum on Egypt’s revised Constitution after the military-led government announced that it had passed with an extraordinary 98.1 percent of the vote.

In a statement, Mr. Kerry listed the concerns of international monitors, including the “polarized political environment,” the absence of an inclusive drafting process or public debate before the vote, the arrests of those who campaigned against it, and procedural violations during the balloting.

“The work that began in Tahrir Square must not end there,” Mr. Kerry said, referring to the Cairo square that served as the central site of the revolution in 2011. He urged Egypt’s military-led transitional authorities to fulfill their repeated commitments to create an inclusive, democratic and civilian-led government with free and fair elections.

Egypt’s Supreme Electoral Committee said 38.6 percent of the electorate had cast ballots in the two-day referendum last week, exceeding the roughly one-third that voted in a referendum on the previous Constitution in December 2012 under President Mohamed Morsi of the Muslim Brotherhood. The revised charter had been universally expected to pass; the level of turnout was the only open question, and both figures were in line with preliminary results reported last week.

The near unanimity of the vote was plausible because the government thoroughly suppressed any opposition to the new charter. A campaign of arrests and mass shootings has crippled the Brotherhood, the main opposition group, which was formally outlawed three weeks ago, and it had called for a boycott of the plebiscite. Almost no critics of the charter were able to express their views in the news media or on the streets. And several activists were arrested just for hanging signs urging a “no” vote.

Mr. Kerry’s tone was far more critical than it has been previously. In August, he had suggested that Egypt’s generals were “restoring democracy” when they removed Mr. Morsi from office after widespread street protests against him.

Inside Egypt, Mr. Kerry’s comments are likely to fuel conspiracy theories among opponents of the Islamists about secret American backing for Mr. Morsi and the Brotherhood. But amid reports that Congress is clearing the way for the continued flow of about $1.3 billion a year in military aid to Cairo, there is little sign that his admonition means a reduction in Washington’s support.

The Egyptian government argued that the one-sided vote gave a new legitimacy to last summer’s ouster of Mr. Morsi, Egypt’s first democratically elected president. It paves the way for Gen. Abdul-Fattah el-Sisi, the officer at the forefront, to seek the presidency.

In a statement Saturday night, Ehab Badawy, a spokesman for the office of the interim president, hailed the vote as a triumph, “another defining moment in our road map to democracy.”

There have been signs that the interim president, Adly Mansour, will call for a presidential election before parliamentary elections.

With General Sisi hinting that he will run for president, holding the presidential election first would allow him to consolidate his power before parliamentary elections that might bring out divisions among his supporters or allow opponents to win seats.