World has to invest $25 tln in oil capacity over next 25 years: Aramco CEO 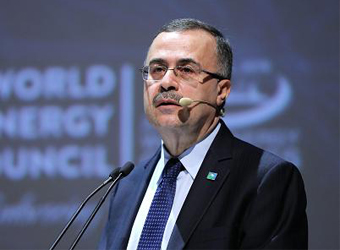 Demand for oil and gas will continue to grow for the next few decades and any fall in capital investment for the industry will cause “spikes” in prices. It is to affect the global economy, according to the president and CEO of Saudi Arabian Oil Company – Aramco.

Speaking Tuesday at the World Economic Forum in Davos, Amin Nasser told a Wall Street Journal panel that $25 trillion would need to be invested over the 25 years on new oil capacity to meet rising demand.

He added that renewable energy will gain a market share over the long term but it would not be dominant.

“It will take decades for them (renewables) to replace petroleum resources. So what we are doing in Saudi Aramco we are building our capacity in the oil,” he said.

He said that the Kingdom of Saudi Arabia had oil capacity of 12.,5 million barrels per day and it continues to build on that capacity, as well as expanding its gas portfolio.

“We will be doubling our gas over the next decade,” he said at the event. “(This will) enable us to put more crude (oil) onto the market,” he added.

Oil prices have seen a dramatic fall since mid-2014 due to oversupply in the industry with analysts also noting a fall in demand. Saudi Aramco has underlined plans to diversify their production.

The Saudi Aramco CEO iterated that there was still healthy demand, however, even withlong-termm predictions that stretch out to 2060. He added that oil “will be with us for decades.”

He said that more expansion is need needed in the sector and more capital would be required.

Clients spent $90mn on Snapchat in 2016, a threat to Facebook: WPP’s Sorrell