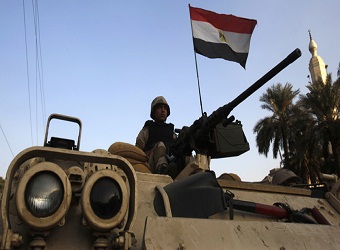 The Egyptian military said on Friday that 26 army personnel were killed or injured by car bombs targeting a security checkpoint near Rafah in North Sinai, and that the army had killed 40 militants in the attacks.

“Security forces in North Sinai have successfully foiled a terrorist assault on some checkpoints south of Rafah, killing 40 militants,” the army said in a statement.

“Forces at one checkpoint were targeted by [a number of] car bombs, which killed and injured 26 personnel,” the statement added.

The army did not provide a breakdown of the casualties. No group has claimed responsibility for the attacks.

A number of foreign states have issued statements via foreign ministries or diplomatic missions condemning the attacks, among them Germany, the UK, Kuwait, and the UAE.

Arab states also condemned the attack with Kuwait, UAE and Tunisia expressing their support for Egypt’s war on terrorism.