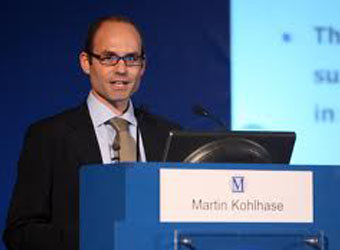 Moody’s Investors Service yesterday changed the outlook to positive from negative for the Corporate Family (CFR) and Probability of Default Rating (PDR) of Aldar Properties PJSC (Aldar) and affirmed the B2 CFR and PDR as well as B3 ratings for Aldar’s $1.25 billion bond (due in 2014 and issued by Atlantic Finance Ltd.) as well as its AED3.75 billion sukuk (due in 2013 and issued by Sukuk Funding (No. 2) Ltd

“The asset transaction agreements with the government of Abu Dhabi announced in December 2011 eliminate significant market and execution risk and will allow Aldar to reduce its debt load to an estimated AED4.5bn by 2015. The total consideration under the agreements amounts to AED16.8 billion, including the cancellation of government debt, and is spread over four years,” said Martin Kohlhase, vice president-senior analyst at Moody’s and lead analyst for Aldar. Kohlhase further explained that “the positive outlook reflects the upward pressure on the ratings if Aldar continues to build a solid track record on the recurring revenue front while also maintaining the solid liquidity now in place to address medium-term maturities.”

Although Aldar’s cash inflows over the coming two years will be materially bolstered by funds from the government of Abu Dhabi and are hence considered of high quality, Moody’s is also monitoring Aldar’s track record in building over the medium term a recurring income stream from its investment properties. Owing to the difficult market environment of the Abu Dhabi real estate market, Moody’s has taken a more cautious stance on how quickly recurring net cash flows are likely to develop.

Nevertheless, in light of the high likelihood of reducing its debt load to AED4.5bn (compared to our June 2011 estimates of AED9bn-10bn excluding government loans; management projects net debt of ca. AED 2.3bn by 2015), we do expect that Aldar will over time generate at least a minimum of AED 500m in recurring cash flows p.a.; (ii) sell its property units and land to non-government third parties in 2012 and 2013; (iii) put in place longer-term financing arrangements for its estimated remaining gross debt of AED4.5bn maturing between 2014 and 2021, which is expected to occur over the course of the coming 18 months. All these measures when executed could result in higher ratings.

As Moody’s does not expect the mix of secured debt relative to unsecured debt to change materially, the B3 ratings for the unsecured debt instruments (2013 sukuk and 2014 bonds) were affirmed and the one-notch differential to the CFR/PDR maintained. This reflects the preferential position of secured lenders in the debt structure.

Aldar Properties PJSC is one of the largest property developers in the Emirate of Abu Dhabi, the largest of seven emirates that form the United Arab Emirates (UAE). Aldar reported sales of AED6.7 billion (USD1.8 billion) for the financial year ending Dec. 31, 2011 and a net profit of AED643 million.