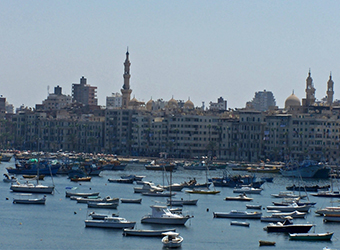 Alexandria Port Authority (APA) has decided to close two main ports in the Mediterranean city on Sunday due to bad weather conditions.

In press statements, the APA’s spokesman Reda Ghandour said the ports of Boughazi and Dekheila will be closed to navigation after a meteorological report recorded a rise in waves and an increase in wind speed above seasonal averages, which could pose dangers to the safety of passengers, cargo and port facilities

The Boughazi Port’s chief Medhat Attiya said, however, loading and unloading operations at the port will continue regularly despite closure.

Last week, the two ports shut down for three days also due to unstable weather conditions.

Heavy rainfall also struck the northwestern governorate of Matrouh since the early hours of Sunday.

Matrouh’s Company for Drinking Water and Sanitation deployed tens of water suction pumps to clear rain water from the streets of the city as well as other cities in the governorate.

The statements by the APA officials come as Alexandria was hit on Sunday with the ‘New Year’ seasonal storm, which is expected to last four days accompanied with heavy rain showers with a drop in temperatures and a rise in sea waves.

Alexandria has already announced a state of emergency to deal with the impact of the storm.

Rainfall is also expected today along other parts of the Mediterranean coast, the Nile Delta, Cairo, central Egypt all the way to southernmost areas along the Red Sea in  Halayeb and Shalateen.

Alexandria will witness a high of 17 degrees Celsius and a low of 8 on Sunday.

Cairo will witness a high of 17 degrees Celsius and a low of 12.

Egypt’s firms obliged to label all food products with prices by January: minister