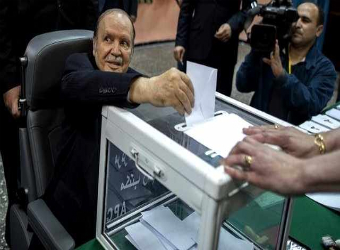 Algerian President Abdelaziz Bouteflika, the independence veteran in power for 15 years, won re-election on Friday with more than 80 percent of a vote opponents dismissed as fraud to keep an ailing leader in power.

Bouteflika had cast his vote sitting in a wheelchair on Thursday in what was a rare public appearance since suffering a stroke last year that raised questions about stability in the North African OPEC oil-exporting state.

The Algerian leader, 77, was already widely expected to win with the backing of the powerful ruling Front de Liberation Nationale (FLN) party, which has dominated the political system since independence from France in 1962.

“The victory confirms Bouteflika can give more to Algerians in the next five years,” his former premier Abdelmalek Sellal told a press conference, with a framed portrait of Bouteflika placed on a stand next to him.

In downtown Algiers, groups of young supporters waved the president’s pictures, honked car horns and set off fireworks in celebrations of his victory.

But the aging leader’s health has left more questions about possible transition in Algeria, who would replace him should he fall ill in his fourth term, and how far the new government will go towards introducing political and economic reforms.

Stability is key for Western governments allied with Bouteflika against Islamist militants in the Maghreb and keen to secure Algerian gas shipments to Europe especially with Ukraine’s crisis threatening Russian supplies.

Bouteflika did not campaign himself, but loyalists praise him for guiding Algeria out of a 1990s war with Islamists that killed 200,000 people. That conflict left many Algerians wary of the turmoil that has swept neighbouring Tunisia, Egypt and Libya since their “Arab Spring” revolts in 2011.

Six opposition parties boycotted Thursday’s vote, saying it would not reform a system mostly closed to change since the FLN’s one-party rule in the early post-independence years.

Benflis, a former FLN chief and once a Bouteflika ally, called the vote a fraud and refused to accept the results. But he gave little evidence and the government dismissed his claims.

Bouteflika won 90 percent of the vote in 2009 and 85 percent in 2004, when his main rival then, Benflis, alleged fraud on an “industrial” scale.

Many Algerians believe rival clans of FLN leaders and army generals – generally known as “Le Pouvoir” or “The Power”, in French – have long tussled over politics in behind-the-scenes deals and see themselves as guardians of stability.

Since his illness, Bouteflika’s allies have transferred or fired several influential army generals and managed to limit the influence of the chief of the DRS military intelligence service who was often a political kingmaker.

How those political rivalries may re-emerge depends on Bouteflika’s state of health, who replaces him and how his allies manage any transition. But most analysts see little turbulence in the near term.

Bouteflika in the past had said it was time for his generation to step aside, but his appearance in a wheelchair at a polling station on Thursday was a striking image for many Algerians who have seen him only rarely since his illness.

“It’s sad that in a country where 70 percent of the people are young we don’t have the chance of choosing someone else,” said Algiers resident Salim. “We have nothing against the man, but four mandates, a wheelchair, it’s just too much.”

Algeria mostly escaped the “Arab Spring” unrest that has toppled long-standing leaders in the region since 2011.

Some Algerians point to the 1980s when the FLN opened up one-party rule to opposition and brought an Islamist party close to election victory. The FLN suspended the vote, and the country slipped into more than a decade of war.

Riots and protests are common among younger Algerians frustrated over joblessness, a lack of economic opportunities and housing shortages. But widescale anti-government protests are rare in Algeria.

A small movement, called Barakat or “Enough” in local dialect, emerged after Bouteflika’s re-election bid to call for peaceful change, though its numbers were limited.

With around $200 billion in foreign reserves from energy sales, the Algerian government spent heavily – especially since 2011 – on subsidies, cheap credits and housing to calm social protests and rioting over food prices.

Even government supporters say that after years of state-controlled policies, the OPEC member state needs reforms to open up its economy to more foreign investment and attract more big oil operators to revive its stagnant energy production.

Vodafone Said to Be in Talks with Netflix for Content