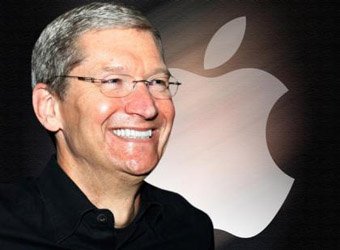 Apple CEO Tim Cook will meet President Donald Trump Wednesday, according to an official schedule released by the White House.

The meeting is scheduled for 1.45 p.m. Washington, D.C., time. It will be closed to the press.

There was no agenda for the meeting posted or hints towards what could be discussed.

An Apple spokesperson was not immediately available for request.

The meeting comes at a time of heightened trade tensions between the U.S. and China with technology caught up in the spat. Both countries have proposedimport tariffs on each others’ products, but the U.S. has been tough on Chinese technology firms.

China is a key market for Apple, one that it has struggled in recently and a potential cause for concern from some investors for Apple’s upcoming earnings.

The meeting also comes a day after Cook attended the state dinner held for French President Emmanuel Macron who is visiting the U.S.

Cook has met with Trump before when several technology CEOs, including Microsoft’s Satya Nadella and Amazon’s Jeff Bezos, traveled to Washington to meet the president. But he has always had an uneasy relationship with Trump.

The Apple CEO told Trump during last year’s meeting that technology employees were “nervous” about his administration’s approach to immigration, a source told CNBC at the time. Cook has publicly objected to Trump’s immigration stance too, particularly around a policy known as DACA. It is a law that protects certain young, otherwise undocumented immigrants from deportation.

Trump rescinded DACA on Sept. 5, 2017, but as of February, DACA was forced by federal court order to re-open cases for renewals. Another federal judge on Wednesday ordered the Trump administration to restart the DACA program.

“The DACA situation is not an immigration issue. It’s a moral issue. This is a moral issue,” Cook said in a recent interview with MSNBC’s Chris Hayes and Recode’s Kara Swisher.

But Cook has been a fan of Trump’s tax law which is helping the company to repatriate some of its overseas cash. Apple announced a plan earlier this year to contribute $350 billion to the U.S. economy over the next five years, though did not go into specifics. Trump called Cook “a great guy” after the announcement and called him up to thank him.

France’s Macron calls for work on Iran deal after talks with Trump,