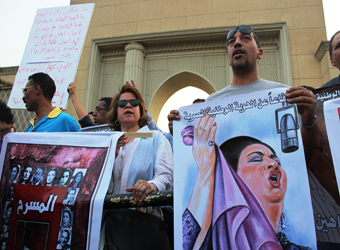 Artists and activists protesting against the influence of Islamists in Egypt’s culture ministry clashed with religious supporters of the president on Tuesday, leaving several people wounded, witnesses and officials said.

President Mohamed Morsi, propelled to power by the Muslim Brotherhood, has faced repeated protests by non-Islamist groups during his divisive year in charge of the country.

Prominent filmmakers, writers and performers have camped out at the Cairo ministry for days, accusing Morsi’s new culture minister of sacking respected officials with the intention of filling key posts with supporters – a charge denied by the ministry.

On Tuesday, riot police moved in to separate the protesters from hundreds of Islamists who gathered on the other side of the street.

The two sides shouted slogans at each other until parts of each crowd moved away to a nearby bridge and started fighting with stones and sticks, said witnesses.

The Ministry of Health said three policemen were wounded, as were several members of the crowds.

Leftist politician and movie director Khaled Youssef told Reuters he believed culture minister Alaa Abdel-Aziz was bent on filling posts with Morsi loyalists who “will carry out the instructions of the Muslim Brotherhood in destroying the Egyptian culture”.

Islamist protester Esmat El-Sawy, a member of the strict Salafi Building and Development Party, said he had come to support the minister “particularly because he has arrived after a very long period of corruption in the Ministry of Culture”.

A group of dancers from the Cairo Opera Ballet Company performed outside the Ministry of Culture on Sunday after some Islamist parliamentarians deemed the art unislamic during a debate.