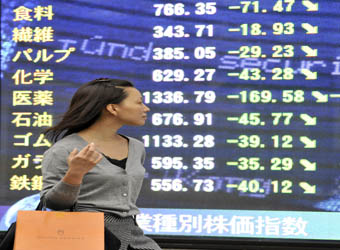 In Australia, the S&P/ASX 200 declined 0.49 percent, or 28.172 points, to finish the session at 5,744.200. Moderate gains in the industrials sub-index were offset by falls in the energy, materials and financials sub-indexes.

Shares of Apple-suppliers received a boost from the release of Apple’s earnings Tuesday. The tech giant beat on the top and bottom lines after selling a higher-than-expected 41 million iPhones in the quarter. Shares of semiconductor maker SK Hynix jumped 3.82 percent, LG Display rose 1.75 percent and LG Innotek soared 10.37 percent by the end of the session.

The sector traded lower, with SJM Holdings leading the losses after announcing a 12.9 percent fall in profit in its first half. SJM’s stock was down 6.56 percent. Other players in the space were also pressured: Melco International Development slid 2.07 percent and Wynn Macau was off 1.77 percent by 3:19 p.m. HK/SIN.

The greenback was a tad higher after hitting a 15-month low earlier in the session on a mix of political uncertainty stateside and market expectations of further rate hikes from the Fed.

A skittish overtone remained in the currency markets, OANDA APAC Head of Trading Stephen Innes said in a Wednesday note.

“The U.S. political crater and lack of fiscal stimulus from Washington will continue to be the primary catalyst for dollar declines,” he said.

In other economic news, a preliminary reading on gross domestic product (GDP) from the European Union reflected that second-quarter economic growth in the euro zone was healthy, Reuters reported. The EU’s estimate reflected GDP rose 0.6 percent in the second quarter, compared with the quarter before, and 2.1 percent on year.

On the earnings front, miner Rio Tinto announced its first-half profit more than doubled on-year due to a rise in iron ore prices, Reuters reported. The company’s first-half profit came in at $3.94 billion, but remained below the $4.19 billion forecast by a Reuters poll.

The miner also announced a $1 billion share buyback, Reuters said. Despite that, Rio Tinto listed in London were down more than 2 percent. Shares listed in Australia closed lower by 0.17 percent before the announcement.

Standard Chartered Bank was also due to report results Wednesday.

In energy news, oil prices extended losses after falling more than two percent in the previous session, but were off session lows. Brent crude fell 0.62 percent to trade at $51.46 a barrel and U.S. West Texas Intermediate crude declined 0.73 percent to trade at $48.80.

Oil had fallen from a two-month high overnight due to concerns over the increase in supply from global oil producers. Output from OPEC producers increased in July despite the bloc’s output cut agreement, a survey from Reuters found on Monday.

In other currency news, the Malaysian ringgit regained some ground to stand at 4.2800 to the dollar at 3:14 p.m. HK/SIN after falling as low as 4.2880 earlier in the session.

The Malaysian currency fell against the dollar overnight. The ringgit traded as low as 4.2840 to the dollar on Tuesday after hitting as high as 4.2735 earlier in the overnight session.

The drop in the ringgit came after Malaysia’s troubled state investment fund 1MDB on Tuesday missed its deadline to make a $600 million payment to Abu Dhabi’s International Petroleum Investment Company.

“So far there has been little panic in the markets since Tuesday’s headline (1MDB) as there are still active buyers of Malay bonds. None the less, the local market is a bit jittery now,” OANDA’s Innes said in a note.

The economic calendar for the Asian trading day was fairly light (all times in HK/SIN):