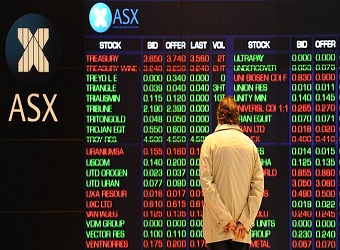 Asian shares were higher on Monday, following the Dow Jones coming within inches of hitting the 20,000 mark during last Friday’s session.

In South Korea, the Kospi wavered between negative and positive territories, and closed down 0.02 percent at 2,048.78.

Shares of Samsung Electronics were up 2.82 percent to 1,861,000 won ($1,542) each, after the company said last Friday that its fourth-quarter profit likely jumped 50 percent year-on-year, beating estimates on strong chip sales and rebound in smartphone sales. The positive outlook comes despite a slight fall in revenue and negative impacts from the cancellation of the fire-prone Galaxy Note 6.

“We believe Samsung Electronics’ earnings power should substantially improve in terms of stability and visibility, thanks to diversified earnings stream and much differentiated competitiveness especially in NAND and OLED,” said CIMB in a note released last Friday. NAND is a type of flash technology used in memory cards, while OLED is an organic compound used for electronic screen displays.

Across the Korean peninsula, North Korea had announced Sunday that it could test the launch of its intercontinental ballistic missile at any time from any location, Reuters reported.

In response, U.S. Defense Secretary Ash Carter said that North Korea’s arms development was a serious threat to the U.S., and that it was prepared to shoot down a North Korean missile launch or test.

Shares of ZTE were down 3.71 percent at 15.05 yuan per share, after the telecom equipment maker announced it would cut about 3,000 jobs, which is around 10 percent of total jobs.

Japanese bourses are closed for a holiday.

Last Saturday, China released its currency reserves for December, which fell by $41.1 billion to $3,010.5 billion. It was the six consecutive monthly decline.

“The reserve drawdown largely reflects capital outflow and the People’s Bank of China’s intervention in the foreign exchange markets. In December the spot dollar/yuan depreciated by 0.9 percent, although the china Foreign Exchange Trade System (CFETS) currency remained roughly stable,” said economists at Citi, in a note on Monday.