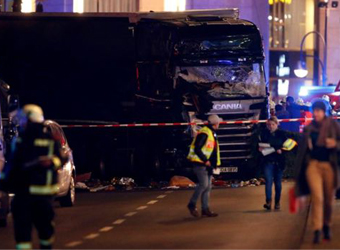 German police are investigating a “probable terrorist attack” after a man ploughed a lorry into a Christmas market in the heart of Berlin, killing 12 people and injuring 48.

They have detained the driver, who security sources reportedly say is an Afghan or Pakistani asylum seeker.

He arrived in Germany in February as a refugee, the DPA news agency said.

The daily Tagesspiegel said the man was known to the police for minor crimes, but not terror links.

“All police measures related to the suspected terrorist attack at Breitscheidplatz are progressing at full steam and with the necessary diligence,” Berlin Police.

German politicians had avoided branding the bloodshed a terror attack in the hours immediately following, but Interior Minister Thomas de Maiziere told ARD television, “there are many things pointing to one”.

The market is at Breitscheidplatz, close to the Kurfuerstendamm, the main shopping street in Berlin’s west.

The crash happened in the shadow of the Kaiser Wilhelm Memorial Church, which was damaged in a World War Two bombing raid and preserved as a symbol of peace.

The truck, which was loaded with steel beams, veered into the market at 20:14 local time (19:14 GMT),one of its busiest times. It crashed through wooden huts and stands packed with tourists and locals.

According to the DPA news agency, police believe the lorry drove 50-80 metres (160-260 ft) through the market area.

German media say the lorry driver was from Afghanistan or Pakistan and had entered the country as a refugee in the past year.

Die Welt said special forces had stormed a hangar at Berlin’s Tempelhof airport where they believed the suspect – who the German newspaper identified as a 23-year-old Pakistani – had been living in a shelter before the attack.

The driver was reportedly seized after leaving his truck and fleeing on foot.

Berlin police spokesman Winfried Wenzel told Die Welt that the man ran down the street towards the Tiergarten, a large public park.

A witness followed him at a distance for more than a mile (2 km), and called the police, who quickly detained him near the Victory Column monument.

The police spokesman speculated that the driver may have wanted to “find shelter in the darkness of the park”.

Police confirmed that a passenger was found dead in the lorry, and said he was a Polish national. There are fears he may have been the original driver of the vehicle, and that he was subject to a hijacking.

Ariel Zurawski, the Polish owner of the lorry, confirmed that his driver was missing and had been unreachable since 16:00 (15:00 GMT) on Monday.

“We don’t know what happened to him,” he told the AFP news agency. “He’s my cousin, I’ve known him since I was a kid. I can vouch for him.”

The truck was registered in Poland and police said it was believed to have been stolen from a building site there, the Associated Press news agency reports.

Chancellor Angela Merkel has been briefed by the interior minister and the mayor of Berlin, her spokesman Steffen Seibert tweeted.

“We are in mourning for the dead and hope that the many injured can get help,” he added.

Reacting to the news from Berlin, the former mayor of Nice, Christian Estrosi, tweeted: “Horror in Berlin. Support for the mayor of Berlin and the German people. never again.”

A senior member of Germany’s anti-immigration AfD party, Marcus Pretzell, has blamed Chancellor Merkel for the attack, linking it to her open-door migration policy which saw the arrival of more than one million people last year.

A British eyewitness, Mike Fox, told Associated Press at the scene that the 25-tonne lorry had missed him by only about three metres as it smashed through stands and knocked down a large Christmas tree.

“It was definitely deliberate,” said the tourist, visiting from Birmingham.

He said he had helped people who appeared to have broken limbs, and that others were trapped under Christmas stands.

“I just saw this huge black truck speeding through the markets crushing so many people and then all the lights went out and everything was destroyed.

“I could hear screaming and then we all froze. Then suddenly people started to move and lift all the wreckage off people, trying to help whoever was there.”

A series of small-scale attacks by Islamist militants alarmed Germany earlier this year. Ten people were killed and dozens more injured in separate gun, bomb, axe and machete attacks in Bavaria and Baden-Wuerttemberg in July.

But Monday’s incident was reminiscent of the lorry attack on Bastille Day crowds in the French city of Nice on 14 July, when 86 people were killed. That attack was claimed by so-called Islamic State (IS).

Both IS and al-Qaeda have urged their followers to use trucks as a means to attack crowds.

The United States labelled the tragedy an apparent “terrorist attack” and pledged its support.

President-elect Donald Trump blamed “Islamist terrorists” for a “slaughter” of Christians in the German capital.

“Today there were terror attacks in Turkey, Switzerland and Germany – and it is only getting worse. The civilized world must change thinking!” he tweeted.

Apple in talks with India to manufacture locally