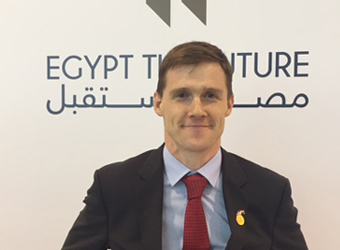 A delegation of over 50 UK companies arrived in Cairo on Sunday, the biggest British trade delegation in the country in almost two decades, the British embassy said.

The five-day visit, headed by British Trade Envoy to Egypt Jeffrey Donaldson, is aimed at fostering UK-Egyptian trade links and exploring investment opportunities across Egypt, with a focus on the oil-and-gas, education, infrastructure, and health sectors.

Over 50 companies will be taking part in talks over the next few days, including existing investors in Egypt such as Bombardier, Fujitsu, Mott MacDonald, and GSK, as well as companies looking to put money into the North African country for the first time.

The visit “is a very encouraging sign of the vast potential British companies are seeing in investing in Egypt’s future,” Jeffrey Donaldson said, according to a statement sent to Ahram Online by the British embassy.

The delegation includes 33 companies from Scottish Development International, six from the Energy Industries Council, 14 companies from the transport and healthcare sector, and four companies focused on opportunities in the education sector.

The UK is Egypt’s largest foreign investor, with British investments in the country amounting to $30.5 billion since 2011, according to Egypt’s State Information Service website.

Mutual trade between the two countries is worth over £1.5 billion per year, UK ambassador to Egypt John Casson said in mid-2016.

Donaldson has hailed an economic reform programme the Egyptian government embarked on in 2016, which includes tax increases, subsidy cuts and loosening capital control.

“We’re seeing Egypt reaping the benefit of recent reforms, with a new wave of foreign investment and exports rising,” he said.

“The next step is to ensure that these reforms have a real impact on the lives of everyday Egyptians, by creating jobs, and it’s exciting to see so many British companies looking to invest here in order to do just that.”