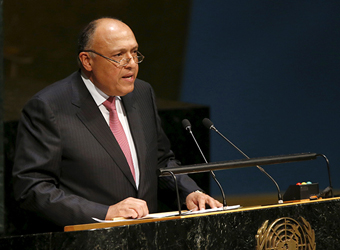 The statement were made by Shoukry during his meeting with President of Ana Lindth Foundation Elizabeth Guigou.

Shoukry greeted Guigou on assuming a second term as president of Ana Lindth Foundation, asserting that Egypt is fully ready to enhance cooperation framework between the foundation and the civil society organizations in Egypt, said the spokesperson.

The Egyptian top diplomat, for his part, expressed Egypt’s appreciation for the important role played by Ana Lindth to extend bridges of dialogue and interaction among religions and cultures in the face of claims for violence, isolation, and sectarian strife, added the spokesman.

President of Ana Lindth, for her part, praised Egypt’s enlightenment role all over its history, adding that such role has recently acquired more importance in face of tyrant powers of terrorism which threaten the achievements of human civilization, the spokesman added.

She also voiced happiness over Alexandria hosting the premises of the foundation, noting that the coastal city is a unique model of interaction among civilizations and cultures, he said.

She also noted that the foundation is seeking to expand its activities and programs in Egypt, a matter which was greatly welcomed by the Egyptian top diplomat, he noted.

The Anna Lindh Foundation is an inter-governmental institution bringing together civil society and citizens across the Mediterranean to build trust and improve mutual understanding.

Co-financed by the 42 countries of the Union for the Mediterranean and the European Commission, the ALF is governed by a Board of Governors composed by representatives of those countries.

Gold rises on weaker US dollar ahead of US data