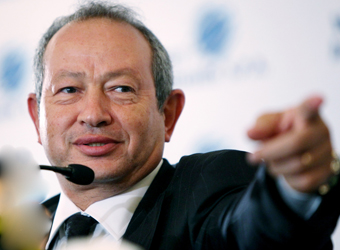 “If the Governor of the Central Bank of Egypt gives me a license for a bank, I’ll open it tomorrow,” Sawiris said during a session at the World Youth Forum (WYF) entitled “Entrepreneurship and Innovation – The Youth Shape the Future of the World.”

Having dreamed of establishing a private bank in Egypt from an early age, he added that he has tried every possible way to fulfill his dream, but guessed that officials have refused to issue a license because he is an individual, not an institution.

Sawiris said that he has been in contact with several European countries on the matter, which agreed to grant him a license to establish a private bank as well as contribute to the financing of small projects.

Small-sized projects in Egypt are being hampered by banks because they are only looking for big names, billionaire went on to say, adding that small enterprises are unable to find sponsors because banks think it is too risky to issue loans to them.

Various panelists in the WYF session raised the issue of how to finance small projects.

Egyptian industrialist Bassel el-Baz said that after he graduated from Harvard University he tried everything to get funding from Egyptian banks for the establishment of a factory, but without luck. Instead, he went to an American bank which agreed to finance his factory.

On his part, entrepreneur Ahmed Adel said that when innovators and researchers want to develop a new technology, they first looks for a financier to turn their scientific research into something that can be applied practically, pointing out that scientific research must be linked to the industry.

The World Youth Forum, which kicked off on October 6 and is scheduled to wrap up on October 11, has attracted thousands of youth, entrepreneurs and leaders from around the world and is being organized under the auspices of Egyptian president Abdel Fattah al-Sisi.

A purge, a resignation and declarations of war: What’s going on in the Middle East?