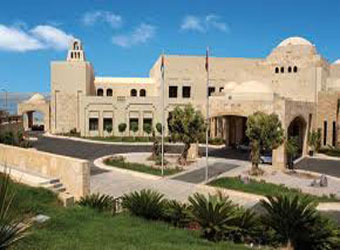 Organized by Business Destinations, the fourth annual travel awards 2011 are designed to recognize the most vibrant and forward-looking businesses, honoring them for their achievements and contribution to the local economy. After thorough evaluation, Business Destinations’ panel of judges rated participants’ performance and announced the winners as the best in corporate and leisure travel, from airlines to hotels, conference centers to top tourist locations.

In the past years, KHBTCC managed by Hilton, has attracted numerous conferences, including The World Economic Forum, the ICT Forum, the World Rally Championship, the Arab House of Parliaments, the International Monetary Fund and the United Nations among many other associations; and has been working tirelessly to enhance its business performance through high service quality and unparalleled supporting facilities.

“We are honored to receive this award in recognition of our commitment to the MICE industry locally and internationally,” said Mr. Naif Zureikat, General Manager of the Hilton-managed KHBTCC. “Receiving the award is very encouraging as we have been working hard to maintain the highest standards in every aspect of our business operations. Looking ahead, we are very optimistic. We will carry on the journey and we promise our clients continued growth and development in order for us to take the lead in the MICE industry and become a business hub both in the region and around the world.”

Located at the heart of the Jordan Valley by the Eastern shores of the Dead Sea at the lowest point on earth, the King Hussein Bin Talal Convention Centre managed by Hilton was established in 2005. Since then, KHBTCC was known as one of the most convenient convention center in the area.

Managed by Hilton, the KHBTCC sits over 24,000 square meters and its 25 halls are fully equipped with state of the art facilities placing the centre as the leader in the MICE business on the local, regional and international fronts.