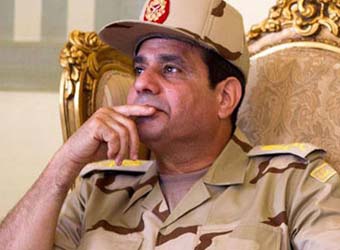 The  Kuwaiti newspaper Al-Siyasa “misinterpreted” remarks by Field Marshal Abdel Fattah al-Sisi in which he said he would run for president, saying he would announce such a decision only to the Egyptian people.

“What was published in Al-Siyasa is merely journalistic speculation and not a direct statement from Field Marshal El-Sisi,” Ali said via Facebook.

Al-Siyasa published a lengthy interview with El-Sisi on Wednesday in which he reportedly said he “would fulfill the people’s demands to run for president.”

The military council recently gave El-Sisi the green light to stand in Egypt’s first presidential elections since the army toppled Islamist president Mohamed Morsi in July amid mass protests against his rule.

Ali’s statement said the decision would be “personally taken [by El-Sisi] in front of the great Egyptian people, clearly and directly, without doubt or speculation.”

The statement concluded with a plea for local and international media to be careful when disseminating news about the military and its leaders.

El-Sisi, who was recently promoted to field marshal from general, is expected to step down as the army chief before seeking election.

Presidential polls should be held between 17 February and 18 April after interim president Adly Mansour decided to bring them forward, altering the transitional roadmap which specified parliamentary polls would come first.

The first phase of the roadmap was completed last month when Egyptians voted overwhelmingly in favour of a new constitution.