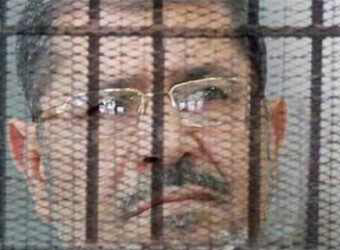 Morsi has been in custody since he was ousted from power in July 2013 after mass protests led to a military intervention by the Egyptian army.

Kholy further explained that former chief of the British Parliament’s Foreign Affairs Committee Crispin Blunt, the one who officially demanded the visit, has a long history of supporting the outlawed Muslim Brotherhood, a group from which Morsi hails.

He further noted that reports produced by Blunt can be seen as subtle cooperation with the Muslim Brotherhood aimed to undermine Egypt, adding that the Egyptian Embassy in London has so far ignored all requests by the MPs to visit Morsi.

Earlier, Blunt said in media statements that he has delivered an official demand to the Egyptian authorities to pay a visit to Morsi in order to reassure that international human rights standards are being upheld.

He added that Morsi is not an “ordinary prisoner” and that any harm caused to him while in custody will have unexpected consequences, adding that the British MPs have yet to receive a response from the Egyptian embassy.

He further explained that upon the authorization by Morsi’s family, a group of lawyers has formed a committee to review the circumstances of Morsi’s imprisonment. As such, the purpose of visiting Morsi would be to review his living conditions in prison.