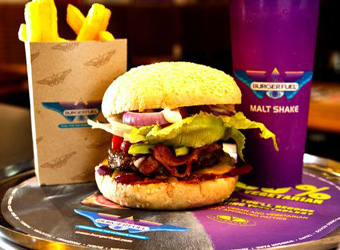 BurgerFuel, a leading New Zealand-based Gourmet Burger chain, continues to widen its Middle East-North Africa (MENA) reach as it gets ready to penetrate the Qatar market following the announcement made by BurgerFuel Worldwide (BFW) of a new partnership with the Al Siddiqi Group (SIG).

Under the latest Master Licence Agreement, BurgerFuel stores will soon open across Qatar and provide residents of the Arab State the distinctive taste and experience of pure New Zealand grass-fed beef.

Rapidly growing across the MENA region and globally, the latest agreement for Qatar quickly adds to the list of the New Zealand-based company’s MENA territories. At the moment, BurgerFuel has existing agreements already in place for the UAE, Saudi Arabia, Bahrain, Iraq, and Egypt. And with the recent opening of BurgerFuel’s first store in Iraq, and Egypt later this year, more stores in Dubai and Saudi Arabia are also currently under construction.

SIG, a well-known Qatar-based business conglomerate, has interests in a wide range of business activities that includes a substantial hospitality portfolio with several premium food brands such as Biella, The Noodle House, Wafi Gourmet and the French restaurant chain Les Deux Magots. In addition, SIG also operates the well-known Al Motahajiba retail clothing chain across the Middle East, which specialises in high-end fashion for traditional Islamic dress for women.

“This latest business arrangement between BurgerFuel and the Al Siddiqi Group demonstrates how New Zealand-based products and companies are now being sought after in various markets within the MENA region,” said Steve Jones, New Zealand’s Trade Commissioner for Middle East, Pakistan and Africa. “Undoubtedly, the historic reputation and retail experience of SIG will provide BurgerFuel with an excellent ability to secure premium retail locations.”

Commenting on behalf of BurgerFuel, Chris Mason, its Dubai-based CEO for International Markets, said: “Qatar is another significant market for BurgerFuel. It is developing quickly and further substantial expansion is under way over the next decade as it prepares to become the first Arab nation to host the FIFA World Cup.”

Calculate How Much Of a Reserve Fund You Need