By End Of Week, Egypt’s Main Gauge Dives Below 5345 Pts 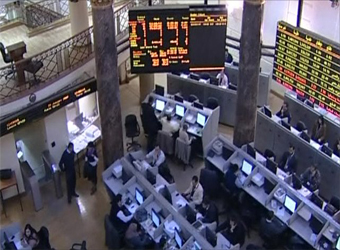 The Egyptian Exchange’s indices have closed on dark red notes on Thursday.

The capital market has closed at EGP 360.783  billion on Thursday.

During the closing session of Thursday, 163 listed securities have been traded in; 108 declined, 26 advanced; while 29 keeping their previous levels.

Egyptians and the non-Arab foreigners’ selling pressures triggered EGX’s losses as they were net sellers seizing 75.29% and 15.52% respectively, of the total markets, with a net equity of EGP 6.802 and EGP 11.252 million excluding the deals.

Meanwhile, Arabs were net buyers seizing 9.18% of the total markets, with a net equity of EGP 18.055 million, excluding the deals.

Capital market experts alongside EG-Finance,  Division of Securities, Egyptian Capital Market Association (ECMA) and Egyptian Investment Management Association (EIMA) are urging the decision makers in Egypt to reconsider imposing the stamp tax on the bourse daily transactions amid the current sharp decline in the volumes and values of trades driven by the political and economic turbulence.

They further said imposing the stamp tax on the daily transactions will increase the burden on the investors by 40-65%. Accordingly, heavier burdens will likely drive the investors to exit the market soon.