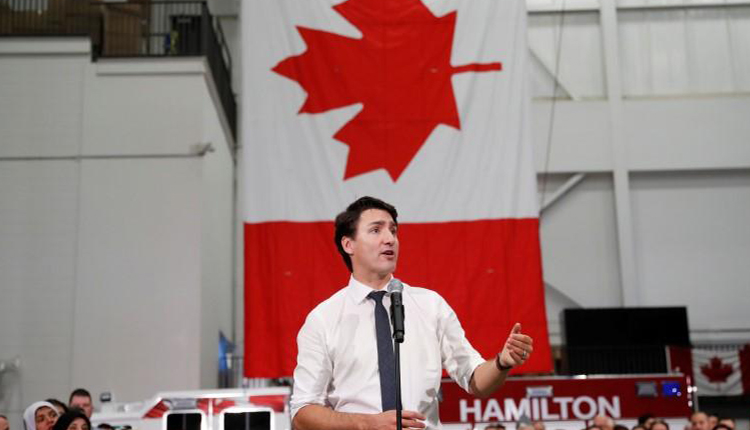 Canadian Prime Minister Justin Trudeau, facing the loss of his Parliamentary majority in an election next week, traded attacks with his main rival on Saturday as a bad-tempered campaign entered its last few days.

Trudeau came to power in 2015 promising “sunny ways” and a new way of doing politics but saw his popularity drop earlier this year amid an ethics scandal. Images of him in blackface emerged last month, further hurting his Liberal Party ahead of the Oct. 21 election.

Polls show the Liberals and the Conservatives in a dead heat, with neither able to capture a majority of the 338 seats in the House of Commons. That would leave the party winning the most seats seeking support of smaller parties to govern.

“I know Canadians want a strong progressive government that would stop Conservative cuts,” Trudeau told a rally in a fire station in the Ontario city of Hamilton, west of Toronto.

In the absence of an overriding narrative, dirty tactics and awkward moments have characterized the campaign.

Another example of that was on display on Saturday when People’s Party of Canada (PPC) leader Maxime Bernier said his party was considering legal action against the Conservatives after the Globe and Mail newspaper reported that the latter had hired a consultant to “seek and destroy” the PPC party and try to get Bernier barred from televised leaders’ debates.

“This is the kind of dirty politics that confuse Canadians’ faith in politics,” Bernier said at a press conference in Sainte-Marie, Quebec. “He (Scheer) is ready to steal the election with lies and manipulations.

“We have already filed a complaint with Elections Canada with our concerns about what the conservative party did. We are considering other (legal) avenues.”

Scheer, speaking in Toronto, repeatedly refused to answer questions about the report, saying only: “We don’t make comments on vendors that we may or may not have engaged with.”

Asked about the story, Trudeau said: “Conservatives have had to use the politics of fear and division and they just make stuff up.”

A Nanos Research poll for the Globe and Mail and CTV released on Saturday put the Liberals at 32.6% public support and the Conservatives at 30.3%. The left-leaning New Democrats, who compete for the same voters as the Liberals, were at 18.4%.

Trudeau sidestepped questions about his plans if he did not win a majority. Minority governments in Canada rarely last more than two and a half years.

Scheer, speaking in Toronto, said Trudeau would spend his first 100 days negotiating a coalition with the New Democrats that would impose tax hikes.

“Justin Trudeau has made it clear he will pay any price to stay in power, and he will use your money to do it,” he told reporters.

There has only been one coalition in Canadian history, in 1917 during World War One.

Trudeau and Scheer made multiple trips to Ontario, which accounts for 108 of the 338 seats in the House of Commons. The Liberals hold 76 of those seats.

Trudeau was scheduled to make four stops in Ontario before flying later on Saturday to the western provinces of Manitoba and Alberta, where anger against the Liberals is rising over government environmental measures that critics complain will hobble the energy industry.

Lebanon agrees final budget with no taxes to appease protesters