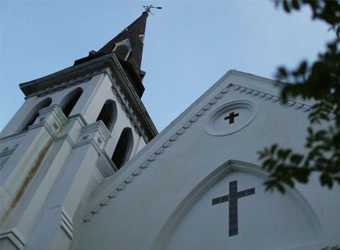 Felicia Sanders, whose son Tywanza died in the 17 June 2015 massacre, said Dylann Roof, 22, was welcomed by the bible study class before opening fire.

She said she initially mistook the shooting inside the Charleston church for an electrical fault with a lift.

If jurors find him guilty, they will decide if he should be put to death.

Assistant US Attorney Jay Richardson told jurors – in a court barely a mile from where the bloodbath unfolded – that Mr Roof had a “cold and hateful heart”.

The prosecutor said the accused had turned his gun on the group about half an hour after joining them at the Emmanuel African Methodist Episcopal Church.

He fired 70 shots, 60 of which made impact, according to Mr Richardson.

The accused also hurled insults at his victims during the attack, Mr Richardson said, and left survivors “to tell his story”.

The assistant US attorney said the accused had planned to inspire a “race war”.

Mr Roof “hoped to send a message to other white people to stand up and do something”, Mr Richardson said.

“He admitted that he almost didn’t do it, that he almost walked out the door,” assistant US attorney said, adding that Mr Roof had chosen the church due to its prominence among African-Americans.

“But in the end he decided that he just had to do it.”

The prosecutor said the jury would also see excerpts from the accused’s “manifesto”, which he allegedly typed on his father’s computer hours before the attack.

“His manifesto was a call to arms, a belief that it was not too late take this country back from black Americans,” Mr Richardson said.

Mr Roof’s lawyer, David Bruck, said he may not call any witnesses because there is little question his client committed the attack.

“He did it,” said the attorney. “You’re probably wondering, so what we are doing here? Why does there need to be a trial?”

The lawyer said he hoped Mr Roof would be held in prison for the rest of his life, rather than executed by the state.

The accused has said he wishes to act as his own attorney if convicted, once the sentencing phase of the trial begins.

Last week he had asked to act as his own lawyer throughout the case.

But earlier this week he changed his mind, saying he would only represent himself after his guilt or innocence is determined.

Mr Roof is charged with 33 federal counts, including hate crimes.