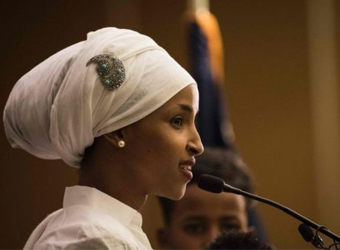 The first Somali-American lawmaker in the US has said that she was subjected to “hateful” anti-Muslim threats from a taxi driver in Washington DC.

Minnesota Representative-elect Ilhan Omar said the cabbie threatened to remove her hijab during a confrontation on Tuesday.

The 34-year-old said the incident occurred just after she attended policy training at the White House.

Ms Omar came to the US from a refugee camp in Kenya as a child.

She made history and national headlines last month when she defeated a Republican to gain a seat in Minnesota’s state house of representatives.

“On my way to our hotel, I got in a cab and became subjected to the most hateful, derogatory, Islamophobic, sexist taunts and threats I have ever experienced,” she wrote in a post on social media.

“The cabdriver called me ISIS and threatened to remove my hijab, I really wasn’t sure how this encounter would end as I attempted to rush out of his cab and retrieve my belongings.

“I am still shaken by this incident and can’t wrap my head around how bold being (sic) are becoming in displaying their hate toward Muslims.

“I pray for his humanity and for all those who harbor hate in their hearts.”

Washington DC’s Metropolitan Police Department told the BBC it was not aware of having received any complaint about the incident.

“At this time, no report could be located with the name you provided,” said Officer Hugh Carew.

Responding to an inquiry on her Facebook page, Ms Omar said she would report the incident once she returns to Minneapolis, noting she did not feel safe as the driver knew where she was staying.

Ms Omar declined to provide more details because “she wants to focus her time in DC attending the trainings, conferences and meetings she has scheduled over the next few days”, a spokesperson told the Minnesota Star Tribune.

Her election came days after US President-elect Donald Trump accused Somali immigrants in Minnesota of “spreading their extremist views”.

Ms Omar also serves as director of policy at the Women Organizing Women Network, a group that aims to encourage East African women to participate in civic leadership.

Minnesota has the nation’s largest Somali community – about 50,000, according to the US Census.