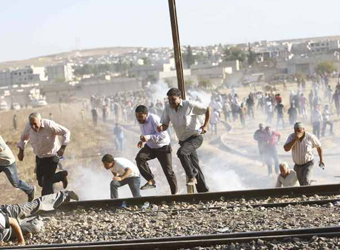 Palestinians clashed with Israeli soldiers across the occupied West Bank on Friday in support of hundreds of Palestinians on hunger strike in Israeli prisons.

Clashes took place near Israeli settlements and army checkpoints close to several villages in the Ramallah area, as well as by Hebron in the southern West Bank and many other locations further north.

In the village of Silwad Palestinian protesters threw stones at Israeli troops manning a military tower, and soldiers retaliated by firing stun grenades and tear gas at them.

The Palestinian Red Crescent said eight Palestinian were wounded in clashes across the West Bank.

A spokeswoman for the Israeli army said that around 2,000 Palestinians took part in what she called “violent riots” across the West Bank and had been “dispersed”. She gave no other details.

The clashes, on a day usually dedicated to anti-Israeli protests, came as a hunger strike by hundreds of prisoners in Israeli jails was on its 12th day Friday.

Palestinian officials says some 1,500 Palestinian prisoners were ingesting only water and salt. Israeli authorities have put the number of the hunger strikers at 1,200.

The International Committee of the Red Cross, the only organisation that can access Palestinian inmates in Israeli prisons, said Friday ICRC delegates were able to visit hundreds of hunger strikers.

The ICRC had been denied visiting rights for nine days, a spokesman said, adding that the group hoped to be able to visit all the prisoners in the next days.

The hunger strike began on April 17 and is being led by Marwan Barhouti, a prominent Palestinian leader and prisoner who is serving five life sentences for murder over his role in the second Palestinian intifada, or uprising, of 2000 to 2005.

Khaled Meshaal, chief of the rival Palestinian faction Hamas, the Islamist movement that rules the Gaza Strip, spoke on Friday about “the imperative to unite behind the cause of the prisoners”.

The prisoners have issued demands ranging from better medical care to phone access.

The Palestinian Prisoners’ Club warned early this week that Barghouti’s health has seriously declined and that he was refusing medical treatment.

Some 6,500 Palestinians are currently detained by Israel for a range of offences and alleged crimes.

Around 500 are being held under Israel’s system of administrative detention, which allows for imprisonment without charge.

Palestinian prisoners have mounted repeated hunger strikes, but rarely on such a scale.