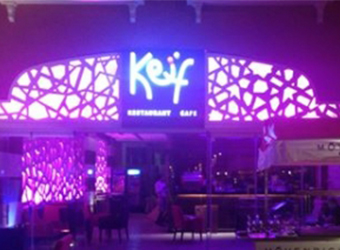 A Cairo court handed down two-year sentences Monday to the owner and manager of a cafe, where a customer was killed last month over a bill dispute.

Café owner Osama El-Naggar and manager Abdel-Raouf Mahmoud were sentenced for locking customers inside the café, a popular restaurant in the upscale district of Heliopolis, and obtaining money from them unlawfully.

Customer Mahmoud Bayoumi, 24, was killed during the incident.

Investigations revealed that Bayoumi was killed in a dispute with the restaurant owner over the cheque, after the latter ordered that the doors of the restaurant be closed and customers be barred from exiting until they had settled their bill.

A waiter at the café is accused of killing Bayoumi and is currently in detention facing trial.

The row occurred after the conclusion of the African Cup of Nations final, which was being broadcast in the café.

The killing of Bayoumi, who was watching the football match with his fiancée that night, stirred an outcry on social media.

Police shuttered the café two days after the incident and raided a number of unlicensed outdoor cafes in the area.