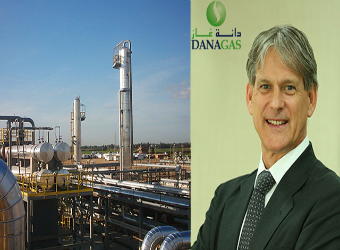 According to the company’s press release published on Wednesday, this is the Company’s first offshore block in Egypt, covering water depths from 20 up to a 1000 m. Multiple play types have already been identified within the acreage and plans for the first exploration phase of four years, which has now commenced, includes seismic acquisition and the drilling of one exploration well.

The Company also announced the award of a new Development Lease, known as Balsam which is located in the West El Manzala Concession, Nile Delta region. The lease, which is 32 sq. km brings the number of current leases to thirteen. Alongside the award of Balsam, Dana Gas has secured an 18 sq. km increase at its El Basant and Sama Development Leases in West El Manzala and West Al Qantara Concessions respectively.

These extensions bring the full extent of the Allium-1 and West Sama-1 well discoveries, made in H2 2012, within development leases awarded to Dana Gas. Dana Gas has filed development plans for these leases and the fields can be brought on-stream very rapidly given Dana Gas’ comprehensive gas pipeline network and processing plants across its operating area.

Dr. Patrick Allman-Ward, Chief Executive Officer, said: “We are very pleased to have signed the North El Arish Concession Agreement. We consider this Block to be highly prospective and it forms an important part of Dana Gas’ growth portfolio. Dana Gas remains fully committed to developing the natural gas industry in Egypt, and we are extremely optimistic about the future. We are continuing with constructive dialogue with the Egyptian Government in order to further reduce the outstanding receivables as soon as possible.”

Dr. Mark Fenton, General Manager, Dana Gas Egypt, added: “The award of these development leases containing the Balsam, Allium and West Sama discoveries has allowed us to strengthen our position in the key gas rich Nile Delta region. These discoveries, together with prior discoveries such as the South Abu El Naga and Salma-Tulip Fields which have been brought on stream in 2013, create development opportunities that underpin our plans for sustained production growth in Egypt.”

Dana Gas is still in discussions with the government concerning the award of a development lease over its Begonia exploration discovery made early 2013.

Dana Gas has also realigned its portfolio in Egypt to focus on the most profitable future growth opportunities for the Company in its core development leases and new exploration concession areas. As a result of this realignment and the need to execute an ambitious investment program, Dana Gas has sold its 50% interest in its Komombo assets which comprise the Al Baraka and West Al Baraka Development Leases to Mediterra Energy Ltd’s subsidiary Sea Dragon Energy (Komombo) Ltd for $6.3 million in cash plus the working capital adjustments. At their peak the assets produced 1,100 bbls of oil per day reducing to an average of approximately 400 barrels of oil a day in 2013. Completion of the Komombo sale is subject to customary closing conditions, including Egyptian Government approvals.

Dana Gas is currently the 6th largest gas producer in Egypt, and operates in the Nile Delta through the El Wastani Petroleum Company (Wasco), Dana Gas’ joint-venture company with the Egyptian Natural Gas Holding Company (EGAS), where almost all of its 695 employees are Egyptians. In 2013, production in Egypt averaged 36,700 boepd, a significant year on year increase of 14%. During the third quarter, the Company announced that it had achieved the highest production levels (equivalent to 41,500 boepd) in Egypt in the last two years. Production has improved significantly during 2013 as a result of bringing key discoveries on stream whilst addressing operational, maintenance and well optimisation issues at key facilities.

In January 2014, Fitch rating agency affirmed Egypt’s Long-Term Foreign-Currency at B- and took its rating off “negative” outlook to “stable” for the first time since January 2011.