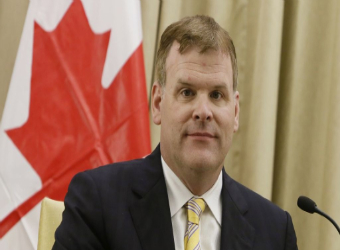 Canada’s foreign minister has warned Egypt that the detention of two Canadians without charges for the past several weeks is a significant threat to relations between the two countries.

Foreign Minister John Baird said Tuesday that he told his Egyptian counterpart that in “no uncertain terms” it is unacceptable. He said Canada’s prime minister has directed that all resources be brought to bear to secure their release.

John Greyson, a filmmaker and professor, and Tarek Loubani, a physician, have been held without charges since mid-August and were ordered detained for another 45 days on the weekend. The men say they were observing an anti-government demonstration Aug. 16 when Loubani heeded a call for a doctor and began treating wounded demonstrators while Greyson recorded the unrest on video.

The pair released a statement on Saturday saying they’ve been beaten and subjected to degrading treatment.

“It is simply unacceptable that Canadians can be held this long with no specific charges, no specific evidence,” Baird said.

Baird said he told the new Egyptian foreign minister that it was “a significant problem in our bilateral relations.”

Baird said he “didn’t’ see any light at the end of the tunnel” despite holding what he called a productive meeting with his Egyptian counterpart on Friday. He said the Canadian government is taking both a political and judicial approach to securing their release.

“The government, at the prime minister’s direction, has been engaged in a big way to secure the release of these two Canadians,” Baird said. “I don’t want to up the rhetoric that would impede their expeditious release. I would just say we’re having strong discussions with the Egyptian authorities on this.”

56 Million Facebook Users in MENA, Thanks to Mobile Connectivity