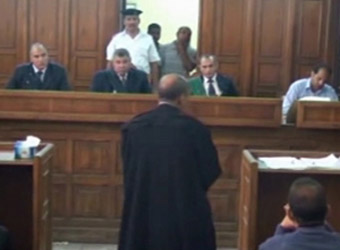 The prosecution in Egypt’s Menoufiya governorate ordered on Saturday the 15 day-detention pending investigation of a traffic police officer accused of killing a tuk-tuk driver in the governorate’s capital earlier this month.

Police officer Ahmed El-Eleimy was ordered detained for four days last week after he shot 40-year-old Mohamed Abdel-Razek in the face on 14 February.

Abdel-Razek died of his injury a week later in hospital.

Ahmed Abdel-Fattah, a lawyer representing the victim’s family, told Ahram Online that according to witness testimony, “Abdel-Razek mistakenly drove his tuk-tuk onto a street where tuk-tuks are not permitted. When the officer tried to stop him, Abdel-Razek got scared and ran, but the police officer caught up to him due to heavy traffic and started beating him, despite attempts by bystander to help the victim.”

The lawyer said that Abdel-Razek managed to get away from the officer and return to his tuk-tuk, after which the officer fired two shots, one in the air and the other into the vicim’s face.

Although the defendant is now facing charges of intentional murder, investigators had initially said that the officer had intended to fire both shots into air, with one bullet accidentally striking the victim. Abdel-Fattah has decried this conclusion as illogical.

“The incident left two young kids orphaned and a widowed wife with no source of income,” Abdel-Fattah said.

The medical examiner’s report on the incident has not yet been released.

There have been several incidents in recent years where policemen have been charged after killing civilians, though the interior ministry has repeatedly stated that these are isolated incidents.