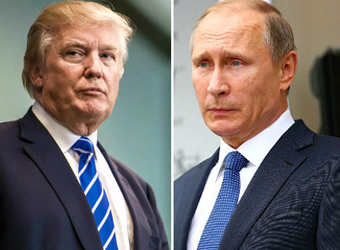 Donald Trump has backtracked on a proposal to work with Russia to create an “impenetrable” cybersecurity unit to prevent election hacking.

Hours after promoting the idea on Sunday, the US president said that he did not think it could actually happen.

The idea of a partnership with Russia was ridiculed by senior Republicans.

It comes after Mr Trump’s first face-to-face talks with Russian President Vladimir Putin in Germany on Friday, in which the pair discussed the issue.

Trump described the outcome of the talks as positive and suggested closer co-operation between the two nations.

“Putin and I discussed forming an impenetrable cybersecurity unit so that election hacking, and many other negative things, will be guarded and safe,” he said.

The initial proposal immediately prompted derision from Democrats, as well as some Republicans who questioned why the US would work with Russia after the Kremlin’s alleged meddling in the 2016 US election.

“The fact that President Putin and I discussed a cybersecurity unit doesn’t mean I think it can happen. It can’t,” he tweeted.

However, he stressed that another issue discussed in his talks with Mr Putin, a ceasefire in south-western Syria, had come into effect.

Speaking on ABC’s This Week programme, he described it as a “significant accomplishment” for Mr Trump.

“What we want to make sure is that we co-ordinate with Russia,” he added.

However, Republican Senator Marco Rubio suggested that such an initiative would be like partnering with Syrian President Bashar al-Assad on chemical weapons.

Media captionTrump to Putin: “It’s an honour to be with you”

A special prosecutor is investigating whether Trump associates colluded with alleged Russian efforts to influence the 2016 US election.

Both Mr Trump and Mr Putin said the allegations had been discussed.

However, the two sides described the content of the meeting differently.

Mr Trump said he “strongly pressed” the issue with Mr Putin, who had “vehemently denied” interfering in the US election.

He also said it was time to work more “constructively” with Russia.

President Putin said he believed President Trump had accepted his assurances that Moscow had not interfered in the vote.

However, US Secretary of State Rex Tillerson said interference in the 2016 election remained an impediment to better relations with Russia, while the US ambassador to the UN, Nikki Haley, said the US “can’t trust Russia” and “won’t ever trust Russia”.