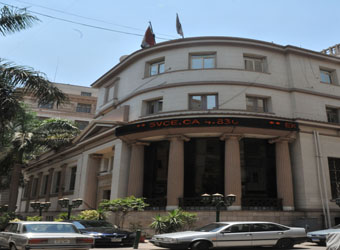 EGX30 hit its highest point on Sunday closing at 5695.62 points, where its lowest point recorded on Wednesday at 5609.32 points.

Mohsen Adel, Vice Chairman of EG-Finance, said there was highly volatility of the indices movements in the market. The EGX indices have faced local individual selling pressures; while foreign buying transactions remarkably boomed during the second half of last week which in turn have contributed to curbing the indices’ losses, Adel added.

The EG-Finance Vice Chairman further noted that the political and economic instability have dragged the market down, notably the attempts to stage civil disobedience in Port Said alongside witnessing a great deal of uncertainty about obtaining the long-awaited US$ 4.8 billion IMF loan.

Stock lowest close during the week came on Sunday at EGP 264.44.

On Sunday, OCI N.V. announced that the GDR holders holding a total of 156,542,609 GDRs (being 98.8% of OCI’s GDRs and representing 75.7% of total shares outstanding including the Sawiris Family and the Abraaj Group have accepted the offer to exchange their GDRs for OCI N.V. shares.

Hermes stated that, now that OCI N.V. share exchange offer has been approved by shareholders, OCI will formally submit the Mandatory Tender Offer (MTO) to EFSA for approval  Thursday 14 February 2013.

According to OCI management, EFSA should respond within 48 hours. Once approval is granted, the offer will be valid for 21 business days.

On Monday, Egyptian Financial Supervisory Authority (FSA) sent a release to EGX, stating that an obligatory tender offer was submitted by OCI N.V., a Dutch company listed on NYSE Euronext. Amsterdam, according to Article no. 12 of the Executive Regulations of Law no. 95 for the year 1992, to buy 47,169,862 shares representing 22.57 % of OCI shares.

On Wednesday, OCI N.V. announced that its subsidiary, OCI, will comply with the Egyptian Financial Supervisory Authority’s (EFSA) request for additional documentation, disclosures and clarification pertaining to the announced Mandatory Tender Offer (MTO) by OCI N.V. on its ordinary shares.

As per the request of EFSA, OCI S.A.E. will host another Extraordinary General Meeting (EGM) to discuss additional disclosures related to the transaction and to subsequently obtain approval on the EGM’s resolutions from minority shareholders.

Once minority shareholders approve these resolutions, the EGM result will be ratified and an updated MTO application will be formally filed with EFSA.

Also on Wednesday, Reuters reported that a deal that would see Bill Gates and other U.S. investors inject $1 billion in fertilizer and construction firm OCI NV has been hampered by Egyptian regulators’ request for clarification of the deal.

This move will delay completion of a deal under which U.S. investors will pay shareholders who choose to sell their ordinary, Egypt-listed shares, said Mohsen Adel, vice chairman and managing director of Pioneer Funds, a financial institution.

“The new disclosures will not affect the course of the deal but will extend the time,” he said.

The transaction may see one of Egypt’s biggest firms disappearing from the local stock exchange.

EFSA head Ashraf El Sharkawy told Reuters the clarifications had been requested “to guarantee the stability of the non-banking financial markets”. He added that the aim was not to obstruct or delay the deal but to protect shareholders.

The foreign-currency [FC] deposit ratings of all these banks were also downgraded to Caa1 from B3, capped by Egypt’s FC bank deposit ceiling.

Egyptian banks such as CIB have been able to keep their bottom lines growing thanks partly to high interest rates paid by the state last year for its short-term borrowing.

State borrowing costs soared as foreign investors exited the local treasury market, tax receipts suffered from a weak economy and the government boosted spending to meet popular demands for better living standards after an uprising against President Hosni Mubarak in 2011.

But Egypt’s business sector has been struggling to recover from the disruption that followed Mubarak’s overthrow.

Hermes stated that, CIB has reported FY2012 net profit of EGP2,226 million, up by 38% Y-o-Y and broadly in line with our forecast.

It added that, the strong earnings increase was driven by very strong net interest income growth thanks to higher yields on government securities, as well as a Y-o-Y increase in trading and investment income, and despite provisioning more than doubling during the year.

Stock highest close during the week came on Sunday at EGP 8.67, while the lowest close came on Wednesday at EGP 8.55.

On Sunday, Juhayna announced that it started establishing a new yoghurt plant (Egyfood) in Assiut with investment cost of EGP 200 million expecting production to start in April 2013.

The company added, in a release sent to EGX that, it completed Egyfood 6th of October yogurt plant to start production before the Holy month of Ramadan season.

The company pointed out that, it plans pumping EGP 1.2 billion investments in 2013, 40 % of it are will be directed to Upper Egypt.

Audi added that, while results came 12% above our expectations, we expect profitability margins to drop during 2013 because of higher raw material costs and the start up cost related to the establishment of new plants.

We believe the share price is likely to remain supported in the short-term as: i) 1Q2013 is likely to be strong (partly on a low comparable base); and ii) Juhayna should continue to attract long-term buyers given its defensive nature, exceptional medium-term growth prospects within an EM context.

Local investors were the most active buyers this week earning the value of EGP 22,169,419.

Arab investors were most active sellers this week by the value of EGP 25,915,815.