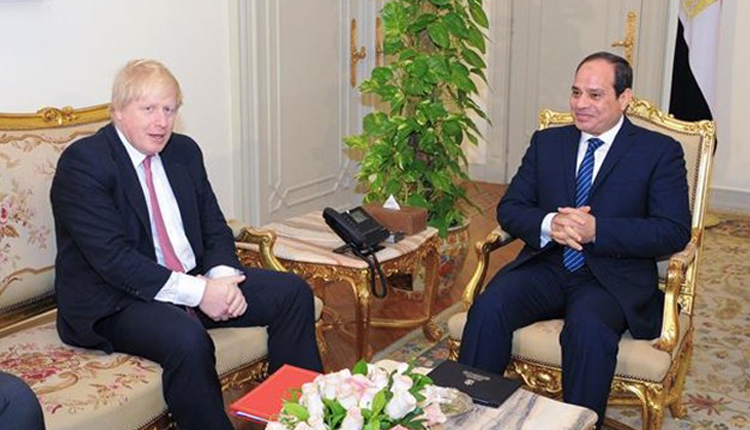 A Phone call between Egypt’s President Abdel Fattah al-Sisi and UK’s Prime Minister Boris Johnson on Saturday is expected to lead to a tangible improvement in bilateral relations between the two countries, the secretary-general of the Egyptian parliament’s foreign affairs committee Tarek El-Khouli said Monday.

“As it is Johnson who took the initiative of making this call with President Sisi, it seems to me that the new UK prime minister intends to take a new positive vision in dealing with Egypt,” said El-Khouli.

According to the Egyptian presidency in a statement on 3 August, President Sisi received a telephone call from the UK prime minister, where Sisi congratulated Johnson on assuming his new post and expressed his wish that the upcoming period would witness ways to boost bilateral relations in all fields, especially the economic, political, security and in tourism.

According to the Egyptian presidency, Johnson expressed his determination to upgrade the bilateral relations with Egypt, specifically in the economic and social fields given that Britain is considered the biggest foreign investor in Egypt.

Johnson also praised the achievements Egypt has made in the economic and social development fields, as well as the national projects and infrastructure developments.

Politically, the British prime minister stated that he is depending on Egypt’s vital role in maintaining stability and peace in the Middle East and Africa, as well as its role in fighting terrorism and radicalism.

The statement added that Johnson was looking forward to meeting President El-Sisi at the upcoming Group of Seven (G7) meetings to be held in France in September.

El-Khouli said the new UK prime minister had significant differences from his predecessor Teresa May.

“May was heavily involved in European affairs, and was not active on the Middle Eastern front,” said El-Khouli.

El-Khouli indicated that the Brexit deal between Britain and the European Union will have an economic impact on the Middle East, and on Egypt in particular.

“This will require that Egypt and the UK sign a number of economic agreements which will be necessary after London exits the European Union,” said El-Khouli.

Farag Amer, the head of parliament’s industrial committee, also said in a statement that he hopes that the new UK prime minister will reconsider London’s suspension of direct flights to Egypt’s Red Sea resorts of Sharm El-Sheikh and Hurghada.

“While the UK under Teresa May was very passive on this point, it is hopeful that Boris Johnson will change this position,” said Amer, adding that “we hope that London under Johnson will also reconsider the active role of the Muslim Brotherhood in the UK and the danger of this group in spreading extremist Islam in Europe.”

EgyptAir signs agreement to be partner in new…