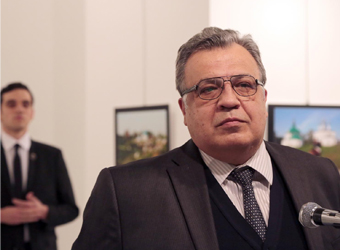 Egypt’s Foreign Ministry condemned on Monday the assassination of Russian Ambassador to Turkey Andrei Karlov in the Turkish capital of Ankara.

In a press release, the Egyptian Foreign Ministry urged all countries of international conventions to provide protection to diplomatic missions, specially amid the ongoing threats of terrorism.

The ministry extended condolence to Russia and its people, voicing Egypt’s support for Moscow in its war against terrorism.

The Yeni Safak daily said on its website that the killer named Mevlut Mert Altintas was a member of of Ankara’s riot police squad. He was later killed in a shootout with police.

Karlov, who had been serving in Turkey since 2013, was shot in the back while making a speech at a painting exhibition in the Turkish capital, the Russian embassy said.

The attack came one day before the foreign ministers of Russia, Turkey and Iran meet in Moscow for talks on Syria.

Russian Foreign Minister Sergey Lavrov made clear later that the meeting of would be held on Tuesday as planned.

Trump’s infrastructure splurge would collide with US skilled labor crunch