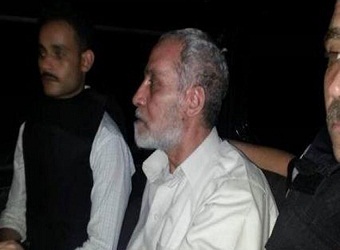 Egypt’s Court of Cassation upheld on Wednesday a 2016 life sentence verdict against Muslim Brotherhood chief Mohamed Badie and 35 others convicted of involvement in deadly violent events in Ismailia, which broke out in the aftermath of the 2013 ouster of Islamist president Mohamed Morsi.

Out of the total 105 defendants in the original case, 49 were sentenced in absentia and 20 were found not guilty.

The defendants were charged with murder, attempted murder, inciting terrorism, raiding and vandalising government facilities among other crimes related to deadly clashes between Morsi supporters and security forces in Ismailia in July 2013.

The clashes left three dead and tens injured in the Suez Canal governorate.

In September, a criminal court sentenced Badie to a life term over deadly violence which took place in Beni Suef governorate in Upper Egypt in August 2013 after security forces dispersed two Cairo sit-ins protesting the ouster of Morsi.

Badie is standing trial in several cases of inciting violence in 2013.

Morsi is currently in prison and faces trials in a number of cases involving espionage and inciting violence.