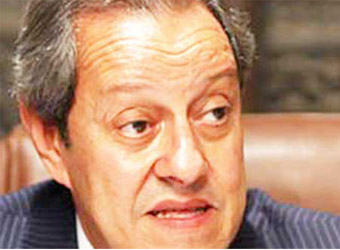 Egypt seeks to “open a new page” of bilateral economic relations with the United States and address mutual interests between the two countries, Minister of Industry, Foreign Trade and Investment Mounir Fakhry Abdel Nour said on Sunday, according to a statement from the ministry.

The statement was made during a Sunday meeting between Abdel Nour and US Trade Representative for Europe and the Middle East Dan Mullaney to discuss methods of cooperation between the two countries, which has been hindered after 30 June, Abdel Nour said.

Following the ouster of former president Mohamed Morsi, the US and Egypt’s economic relations were affected after the Obama administration began to review the impact the ouster would have on the legality of its $1.5bn in annual aid. US assistance to Egypt includes $1.3bn in military aid and $250m in economic aid.

According to Abdel Nour, the Egyptian economy requires investments with a value of 30% of GDP in order to accomplish a 7% economic growth each year. He added that the government is planning to adopt measures to attracted foreign and domestic investments.

The US is interested in boosting trade and investment cooperation with Egypt in the “coming period”, Mullaney said during the meeting, adding that Egypt represents a trading hub for American exports to African, Middle Eastern and European countries.

During the meeting, the pair highlighted the significance of cooperation in the fields of small and medium enterprises (SMEs), communication, technology and agriculture, the statement said.

Mullaney noted that an American delegation will visit Egypt in early August to discuss future cooperation in the agricultural field.

The value of Egyptian exports to the US from January to November 2013 registered EGP 7.7bn, down from EGP 8.8bn in the corresponding period  the previous year, a report from the ministry noted in December.

According to the Egypt Information Portal (EIP), Egypt ranked 58 on the list of top exporters to the United States in 2013, with petroleum products its most exported goods.

One fifth of Egypt’s imports, meanwhile, come from the US, according to the State Information Service (SIS).